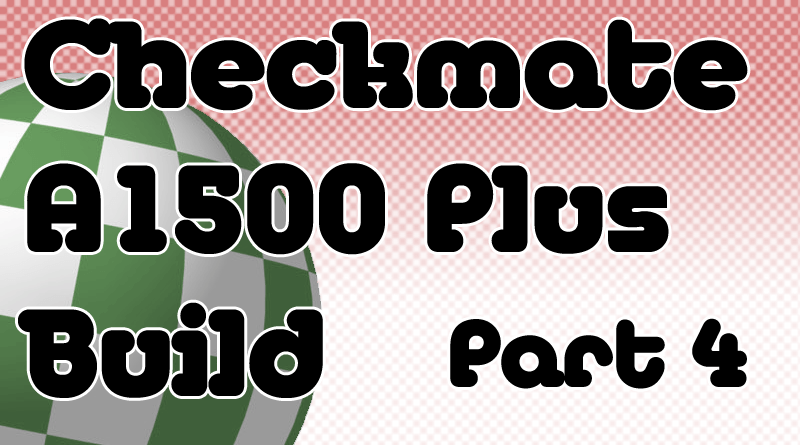 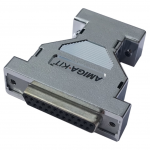 My Scandoubler/flickerfixer was introducing vertical lines and some image smearing, at least until it warmed up. I have acquired a VGA adaptor from AmigaKit and the resulting image is great. As there are no securing screws on the adaptor I stuck some foam on the underside of the adaptor to keep it level with the motherboard socket. This prevents it from exerting any bending force.

The adaptor uses a 25 pin connector that has been cut down to 23 pins. Would some kind manufacturer please produce a healthy supply of 23 pin connectors?

I wanted to move the CF card to a location that would be easily accessible. There is a removable panel at the front of the case for such. I have seen people cut into it to create USB and other such ports. I’m not really happy to chop parts of the case up so I came up with an alternative. With the panel removed I cut and stuck some plastic to the inside of the case just behind the opening.  This created a level platform high enough for the CF card board to sit on and the CF card itself to protrude through the front of the case.

It is all kept in place by strong, double sided tape! A non destructive solution. Card removal and insertion isn’t a problem, enough of the card sticks out to grab and you can easily pop it back in by feel. If the tape does give out, I will make a clamping piece that is held down by the screw holes either side of the added platform.

ROM Switcher and CD Audio Out

I made two other small modifications. Some old ISA card blanking panels were used to close the open slots on the back of the case. I then mounted a switch and a 3.5mm audio jack onto one. The jack is for the audio output from the optical drive when playing a music CD. The switch enables me to choose between Kickstart 3.0 which is hard wired on the accelerator board and Kickstart 3.1 which is socket mounted on the motherboard.

This was the most important part of the finishing touches that I wanted to perform. A standard size optical drive fits and works perfectly but it is ugly (see the photo above), it completely ruins the look of the case. I had been looking into reports from other users on their success and failures in connecting a modern SATA drive, via an adaptor to the IDE interface.

I took the plunge and ordered an LG GS40N Slimline DVD drive and an SATA to 40 pin IDE converter, both from eBay. Upon delivery I realised that the drive used the slimline SATA standard and I saw that it had Hitachi on the label. Does this mean that LG have their drives made by Hitachi or have I been duped? Either way I would need to convert between SATA standards. I found a suitable cable made by Startech, it’s part number is SLSATAADAP6 if that helps you. The SATA to IDE board is very simple with only a jumper to select between drive A or B. 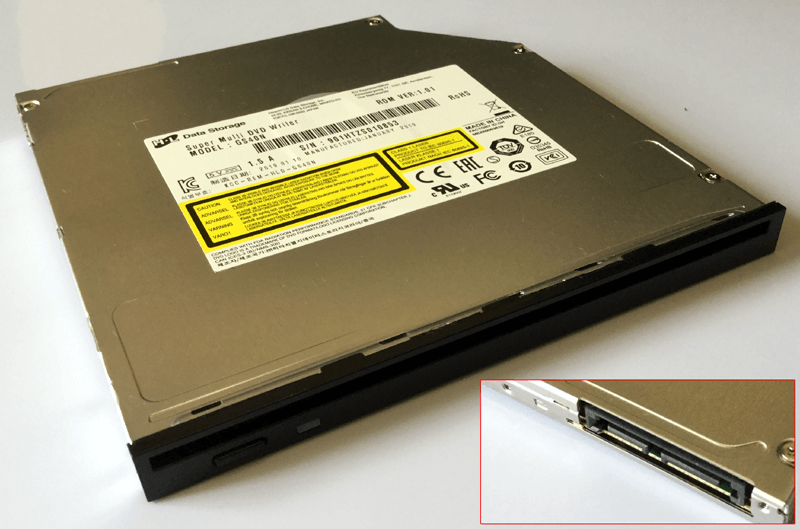 A quick test with the drive resting on the top of the open case proved that, amazingly, it worked first time. I had been expecting to have to use the IDE Fix 97 software to locate the drive but it worked perfectly in place of the old drive. Trouble finding a compatible SATA/IDE board was also anticipated, there are a few different types out there and I have heard that some just don’t work.

I tested reading from discs, ejecting and inserting different discs and had no issues. The top of the drive’s casing will flex upward during the eject procedure, is this normal?

I found that I needed to remove the floppy drive from the drive mounting platform so that I could properly position the optical drive. This is because the drive screws in from the sides and you cannot get to them with the floppy in place. Making sure that the optical drive was as close to the front of the case as possible, I reassembled everything and ran into a problem. The drive would no longer take in discs.  It would go in so far but then stop and make some complaining noises.

As the only thing to have changed since my earlier test was the drive is now mounted on the drive tray I used sheer brain power to deduce that this was the issue and I came to the conclusion that the tiny screws I used to hold the slimline drive in place were too long and were interfering with the mechanism. I loosened them off one by one until I found the culprit.  Leaving it in place but not fully tightened did the trick!

There are a couple of downsides to using a slimline drive. The first is that there is no external eject button on the drive bay fascia. A small pin hole allows you to reach the drive’s eject button if needed. You are expected to use an eject program, such as that supplied with IDE Fix 97. The second negative is that there is no audio out connector on the back of the drive. This renders my previously installed jack socket is redundant, oh well. I have read that there are programs that allow the Amiga to play the CD through the Paula chip, I will look into that.

All that was left was to get the machine to its new home, slap the supplied sticker on the front and reunite the A500 with its old, yellowed and recently upgraded tank mouse. 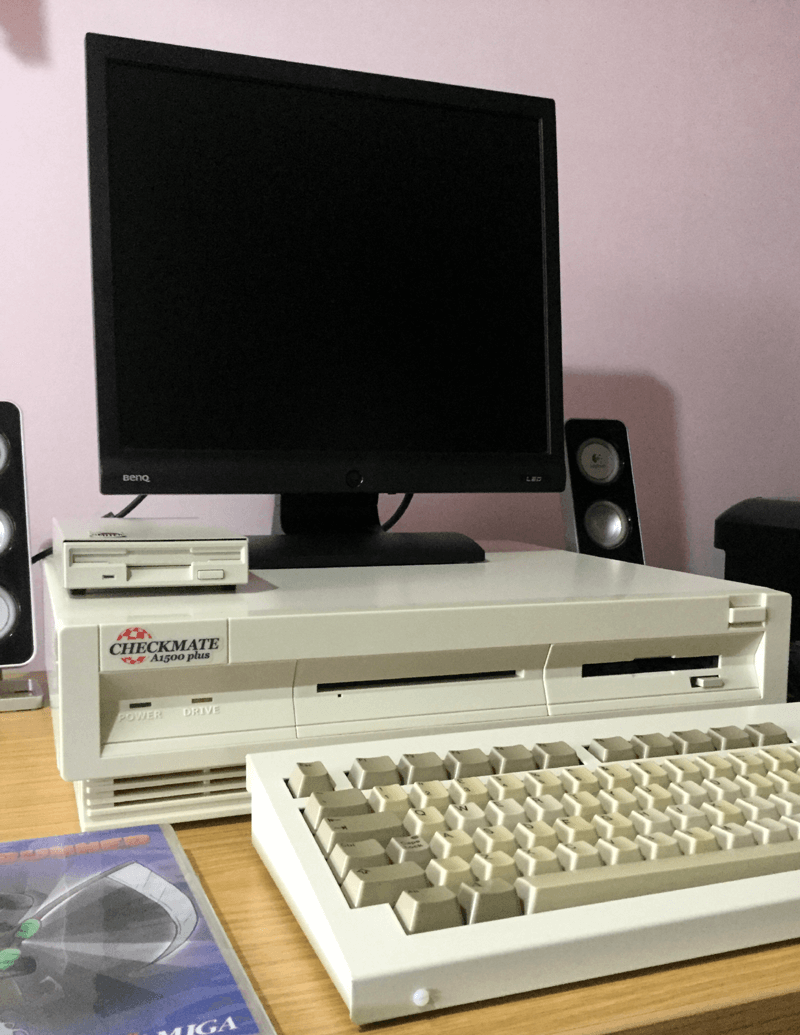 It has been revealed that the Checkmate A1500+ case is soon to be no more. Only 200 more of each colour are to be produced. If you have anything other than a bog standard A500, A600 or A1200 then I wholeheartedly recommend the case. It’s a great way to bring a number of accessories into one neat package and give you that big box Amiga you really wanted.

It’ finished! This is the last update on the build of my Checkmate A1500+. Due to the Covid 19 situation I was placed on furlough at the end of March. The Checkmate case arrived just a few days later, what perfect timing. It has been an enjoyable project and the result is something I am very happy with. It has not been without its problems, there was corrosion and a leg on a custom chip broke off! I hope you found some of this interesting and possibly helpful if you are working on your own Checkmate project.

The result of all this is that the Amiga is out of the cupboard. It has a permanent home on its own desk once again, for the first time in many years.

Amiga users are never happy. I really would like to get a new Scandoubler/Flickerfixer.  I find staring at Dpaint in an interlace mode to quickly become painful. The Indivision ECS it seems ideal. However, given that my accelerator board sits above the Denise chip ( to which the Indivision ECS needs access ) I don’t think it would fit. A possible solution to that is to use a CPU relocation board to get the accelerator out of the way.

I’d also like to add a network port so that file transfer to the PC is an option.

What about adding some risers?…….

Update: Shortly after finishing the build I discovered that my Amiga was killing floppy disks! Find out why here.