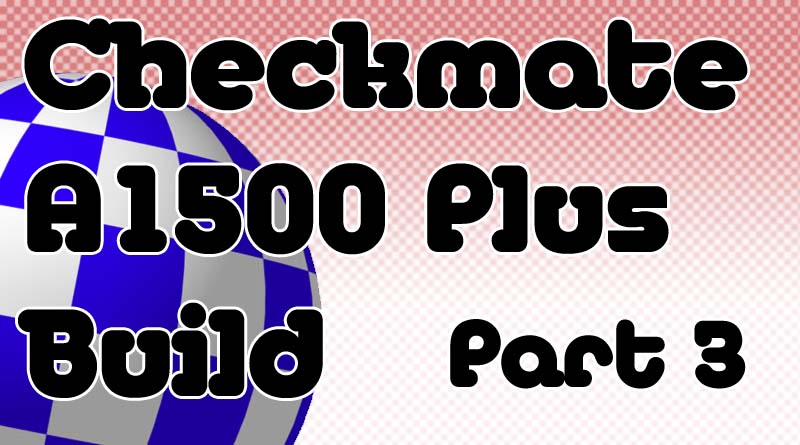 This is a fairly short update as I have been waiting for deliveries.

The most important thing I have done since my last post was that I have been able to confirm that the A500+ system still works. After taking pretty much everything apart when I cleaned and washed the motherboard I was convinced that I would have broken something, I usually manage to break at least one thing. Amigas are sturdy machines it seems.

I played a couple of games and a few demos. Sadly, Zool 2 has succumb to the dreaded bit rot. I’m going to need to ADF my file storage floppies as soon as possible.

I had been planning to install an Alfapower IDE Controller/4 MB Memory upgrade (Zip Ram) in the Checkmate but.  The Viper 520CD accelerator has 8Mb of RAM onboard which I believe is the maximum amount of Fast Ram the A500 can deal with. The Viper also has 1x 2.5″ and 2×3.5″ IDE ports. I have tried to connect the CD drive to the Viper in the past but had no luck. If I can find out how to get this to work then there is absolutely no need for the Alfapower card at all.

Since part 2 I have purchased an SFX power supply and a new monitor just for the Amiga.

Choosing and fitting the PSU

When trying to ensure I purchase the correct product I always look for help online and quite often I find conflicting advice that leads me to a dead end. I discovered that some PSUs expect a minimum draw in order to function correctly.  Some fans are tied to the 12v supply and it seems that the Amiga makes little use of 12v and so those fans may not spin. I want the fan to spin, not just to cool the PSU but the whole system.

It looks a tight fit in the photo but there is sufficient distance between the PSU and the components on the motherboard that enough air can be drawn into the PSU’s fan. The need for the old, modified external ATX supply I had been using is eliminated. Another advantage is that you can now switch the Amiga on/off using the case switch. The Zorro 2 Interface board has a header for the switch so that was connected, as was the 24pin power connector from the PSU.

I wanted to to connect the HDD activity LED to the CF card reader to show when it is being accessed. You can do this by using the signal on pin 39 of the IDE port. Happily, the Viper accelerator already has a header for this. I couldn’t find a 2 pin cable to connect so have used a 4 pin until I can replace it.

I will also mention that I tried to hook up the case’s system power LED to the 2 pin connector that is part of the case’s keyboard connector. My intention being that it would light up along with the LED on the keyboard itself. This doesn’t work, neither LED would light. So I will need to look to see if there are other possibilities.

The CD Drive and IDE Fix 97

Getting a CD drive to work was where I thought I would have the biggest problem. I have been using the Alfapower controller to connect the CD drive. No matter how I look at it there simply isn’t enough room in the case to install the Alfapower in the Zorro Interface and mount a CD drive in the unused bay.

Last time I attempted to use the Viper’s IDE for the CD drive I was using my old Amiga hard drive install which had been happily running the CD drive via the Alfapower. I had assumed that the drivers were already there and the system would pick up the drive on the other port, not so.

I decided to have another go at plugging the CD directly into one of the two 40pin IDE connectors on the Viper accelerator card. Turns out, the solution was very simple. I knew I needed some sort of drivers and IDE Fix 97 was the obvious solution. This time though, I was running the system from Compact Flash with a basic Workbench install from Amiga Kit.

The Amiga Kit CF card had the IDE Fix 97 software in a folder but it didn’t seem to be installed. I went ahead and ran the installer and it asked for  registration details which I didn’t have. However, a search online and I found that Power Computing had released a key for anyone to use. It works and the software discovered the CD drive under Atapi devices. The drive icon appeared on the Workbench screen and I may have let out a small cheer. Small victories!

Just in case it helps anyone, here are the details you will need to register IDE Fix 97:

Great! Now all I needed to do was repeat that on my other CF card which contains a copy of my original hard drive. I used the PC and WinUAE to copy the install folder between cards and tried again. My Amiga runs Directory Opus Magellan which is a Workbench replacement and IDE Fix 97 doesn’t seem to like it. I get to the point where the IDE fix software starts to try to set up but then the installer sits at 0%.

If anyone knows of a way to use the 2 pieces of software together I would be very grateful if you could leave a comment below. I will revisit the problem at a later time but for now its not a major issue.

As it currently stands the CD drive gets its power from the serial port as it did when it lived in its own enclosure. Now I can move it into the Checkmate case and power it from the PSU directly. The old enclosure included an audio out jack so I could mix CD audio with Paula’s output. I think I will add that jack to the rear of the Checkmate A1500 Plus case, maybe mount it on a blanking plate. Speaking of which, I recently dismantled my old PC’s case and have reused its blanking plates. Finding the correct screws to fit was a pain, the holes are quite tight and none of the supplied screws seemed like they wanted to go in.

Current thoughts and what next

The biggest thing I am yet to do is swap the standard CD drive for a slim line drive. I have read that people have had varying amounts of success in getting these to work. They require an SATA to IDE convertor.

I’d like to extend the CF connector and mount that in a way that allows me to swap cards easily. Luckily there is a removable panel on the front for that sort of thing.

The BeQuiet power supply is almost silent. With the case lid in place I doubt it will be audible at all.

The Benq BL702A monitor is working but there are mild issues with visible vertical lines and some horizontal smearing to the sides of bright items at the edge of the screen. Such as the white bar at the top of the screen. This seems to reduce as the scandoubler/flickerfixer warms up. There are some jumpers and a screw adjuster on it so I will look up what these do. I did look at some new, internal scandoublers but I’m not sure these would fit with the Viper in place. As the screen will accept a 15Khz Amiga output I could try a straight RGB to VGA adaptor and see how that looks. Some online searching suggests that I can play with the monitor’s pixel clock and phase settings to improve the image, I found some suggested settings.

Ok, I’m very happy again. For a while I was wondering if I was pursing a pointless, expensive project. Now that I know the Viper works with a CD I can get everything into 1 box which is why I did this.

The Checkmate case certainly opens up a number of options for Amiga owners. If you have a number of expansions it provides a neat way to tidy up your system. For those planning to expand on a stock system then this makes a great starting point. If you are planning on going down this route then plan what you want to do ahead of time. Get as much advice as you can.

I’m not done yet. Part 4 should contain the last few tweaks.

What are people’s thoughts on the Checkmate case?