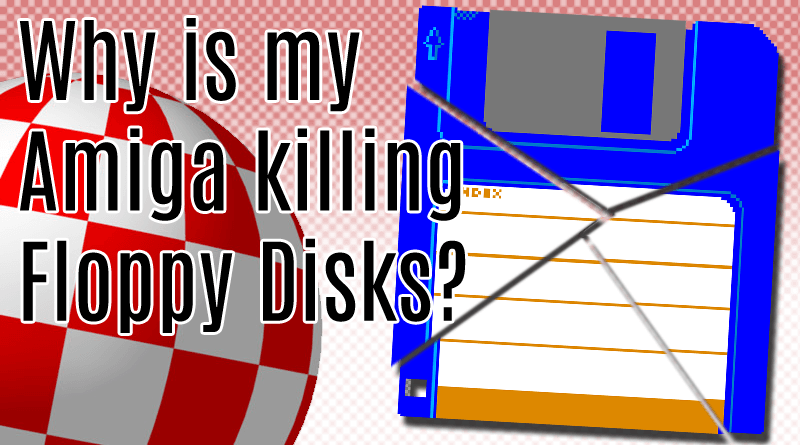 This is not intended as a guide but if this short write up helps anyone answer the question “Why is my Amiga Killing Floppy Disks” then it’s not been a waste of time.

Recently, while moving my Amiga A500+ into a Checkmate A1500+ case  ( you can read my series of adventures with the Checkmate A1500+  ) I discovered that despite having removed the Varta backup battery and replacing it with a CR2032 that there had been some damage to the motherboard. Thanks to some helpful folks on the Amigos Discord server I gave the board a thorough clean and found the system was working just fine. Or so I thought.

Most of the damage was around the area of the board where Gary sits. Gary is the chip that among other things looks after the floppy disc drives. I had tested the drive by booting a few games and reading some discs in Workbench. It never occurred to me to remove the write protection on a disk and try to save a file.

What is going on with my Floppy Disks?

My first hint of an issue arose when I ran the game Trap Runner. The game will save your score to the disk and so the write tab on the disk has to be enabled. The second time I loaded the game it crashed just after the title screen and a debugger informed me that there was a problem with “main.asm”, whatever that is. At this point I thought it was just a dodgy disk.

I realised that there was a serious problem when I enabled a perfectly working disk for writing only to see DF0:???? when I put it back in. Setting the disk to read only again made no difference. I tried another disk ( this time one I could live without if ruined ) and the same thing happened. I tried once again, this time using the external drive DF1: and the same result.

Why is my Amiga Killing Floppy Disks?

I removed everything from the new case.  As the traces on the board looked good and I couldn’t see any really bad solder joints I decided that I would start with the simplest checks and to focus on Gary. First thing was to check that each of his legs were connected to his socket’s solder joints on the underside of the board. I got all the way to pin 44 before the DVM stayed silent. A double check confirmed that pin 44 wasn’t connected to the rest of the system. All other pins were fine. Excellent, this is most definitely the problem and should be an easy fix.

Gary is in a bad way and will only get worse.

Carefully removing Gary I noticed that pins 44 and 46 both had visible marks on them. I cleaned them and their sockets as best as I could but still pin 44 wouldn’t make a good connection unless I pressed down on the chip. I didn’t want to get too aggressive with the pins or the socket due to their age. My Dad however had NO such issues when he saw the pieces on the table and heard about the problem. He set about giving the pins a good clean but in the process broke the thin part of pin 46 off!

What to do about Gary?

To be fair, I had noticed that pin 46 wasn’t as robust as the others previously. Replacement Gary chips are about £10 on eBay and I was about to order one when Dad had an idea. The plan was to perform light surgery on Gary and replace his broken leg. With nothing to lose we scrubbed up. Luckily, Dad keeps all sorts of bits and pieces and he happened to have a chip with compatible size donor legs. A leg was snipped off as high as possible, cleaned and eventually soldered on top of the broken one. Some careful bending and Gary was ready to try his new leg.

Gary lives to fight another day.

Very happy to say that there was a good connection for all pins.  Once again, I could insert read write enabled disks without the Amiga killing them. Sadly, it wasn’t able to read the disks it had previously ruined but they could be formatted for reuse. Quick format wouldn’t work, it needed to be a full format the first time. Same for disks in the external drive.

Had the issue not have been found so quickly my next step would have been to check the motherboard traces. For that I would have used an Amiga A500+ online schematic source. Page 41 shows that pin 44 of Gary is connected to pin 9 of U36. It carries a signal is named DKWEB. It causes the selected drive to begin writing data. Though why the Amiga would need to write data when a new disk is inserted I do not know.

Those Varta batteries have a lot to answer for.