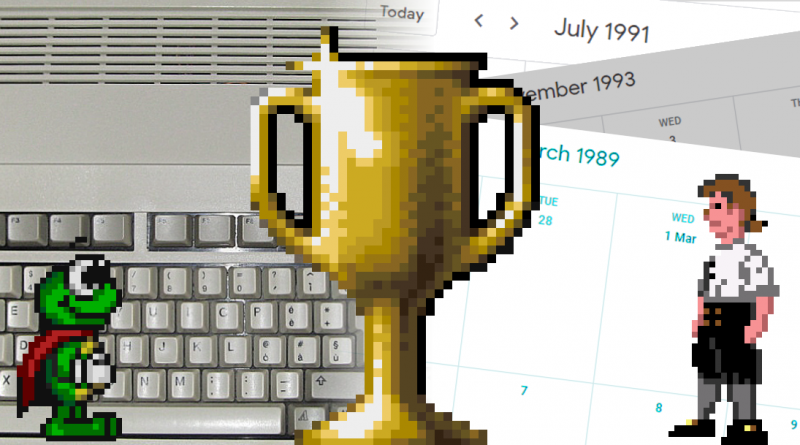 Aside from giving you a creative edge, the Amiga was (and is) a fantastic games machine. This isn’t up for dispute – certainly around these parts – but what does come up for debate on a regular basis is quite when it reached its peak as a gaming behemoth. In an effort to answer this (or stir up even more debate/trouble), I decided to do a little lightweight analysis using some stats at hand.

So how am I gauging the peak? Firstly, we need to consider the ‘when’. The ‘classical period’ of the Amiga is generally considered to be from the release of the Amiga 1000 in 1985 right through when the last Amiga 1200 was sold in 1996/1997, so this is where I will be concentrating my investigation. As an  indicator for what represents the gaming peak, I am using ‘the period when the highest number of ‘popular’ games were released’. And the source of our data for this analysis will be the respected Amiga database/review site Lemon Amiga.

Before we get started, I’m going to drop a huge caveat here. All reviews on Lemon are user reviews. That ranges from professional objective reviewers through to people who are just dropping 1s on their hated games and 10s on their favourites. Objectivity cannot be guaranteed or expected here, but we can at least hope that the law of averages will smooth out the rough patches in a large enough data set.

Look, I appreciate that this isn’t going to perfect by a long shot, but it’s the best we’ve got I feel. I could go back to the magazines of the era, but that has its own problems as I’m sure we’re all aware. Plus it would take a lot more time to pull together!

Note: For each chart below, I have provided the criteria used to create them (hover over the graph to see). Please take the information within the context of the sample set!

So what is our data telling us about the golden era of Amiga gaming? And how does this compare to our own memories of years gone by?

We can see from the graph above that there is a clear spike in popular games between 1991 and 1993, 1991 having the other years beat with 19 titles released. Over half of the popular titles were released in this 3 year period. I’ll also give 1989 an honourable mention pulling an admirable 12 titles out of the hat.

I don’t think this is a result that will surprise a lot of people – this 3 year period (maybe slipping a little further into 1990) is frequently cited as being the time when the Amiga was at its best. The numbers would seem to agree with this. The figures for 1996 and 1997 – when the Amiga was languishing with all the issues around finances and ownership – speak for themselves.

In case you were wondering, here’s the high-flying titles that were released in that peak period – I’m sure you’ll see a few named you’ll recognise:

Remember – these aren’t the best Amiga games ever released, they’re just the most popular ones that were released together!

The other side of the coin

I thought it would be interesting to see the other extreme as well – when were the worst games released? This actually proved to be much more difficult to establish, and I have less confidence in the information presented below. While there are a wealth of opinions on the cream of the crop, people are just less likely to write a review for a game they don’t like. So just looking for games with a large number of votes and a low score won’t cut it – bad games don’t often have reviews numbering in the hundreds. With that in mind here’s what the data showed:

It should be noted that nothing in this sample set scored more than 2.4 on Lemon Amiga. So we really are looking at the bottom of the barrel here! 1989 is the clear… winner(?)… here, with 13 titles in the bottom 100, but there’s a much broad peak to look at, spanning from 1987 to 1991. I think the earlier years can probably be put down to the quality of software in the Amiga’s formative years – there were a lot of 8-bit ports and a lot of lazy Atari ST ports before the Amiga truly hit its stride. 1990 and 1991 are less easy to explain, especially since they feature in the ‘golden’ list as well. We may be able to attribute this to the fact a lot of games were coming out in this period of all levels of quality, but it may be truer to say that for any successful system, there will be an amount of shovelware chucked out to try and ride the wave while it is cresting.

The pinch of salt

Like I said coming into this article – this is not a science and you should take it with a huge pinch of salt. It’s a hugely subjective topic too – we’re looking at things through the lens of the past and also with the fickle aspects of popular opinion. One person’s wonder years could be another’s mediocre moment. In the end, this is just an interesting thought experiment, it doesn’t really matter!

If you would like to do your own analysis, head to Lemon Amiga, specifically the Best and Worst lists. Maybe leave a review or two while you’re there!

What were your favourite years of Amiga gaming? When did the games you cherish get released? Pop it in the comments below, I’d love to hear your thoughts!

9 thoughts on “When was the golden era for Amiga gaming?”