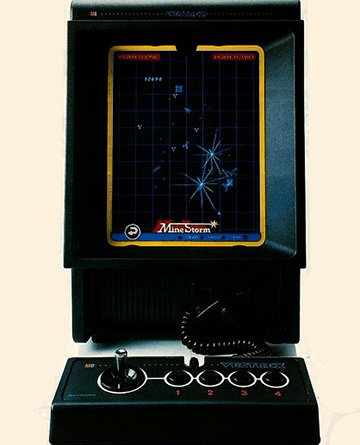 The very first cartridge-based home video games system I experienced was actually not an Atari 2600. It was not even an Intellivision, a Haminex nor a Dick Smith Wizzard – it was the Vectrex System which was released by Milton Bradley in Australia during 1983.

Unfortunately, the Vectrex only had a short production period — roughly 2 years — from mid-1982 until early 1984. After the 1983 video game crash, Milton Bradley attempted to keep the system alive by developing some new peripherals for the system. However, Hasbro took over control of the Vectrex during 1984, and shortly after doing so, put it out to pasture. 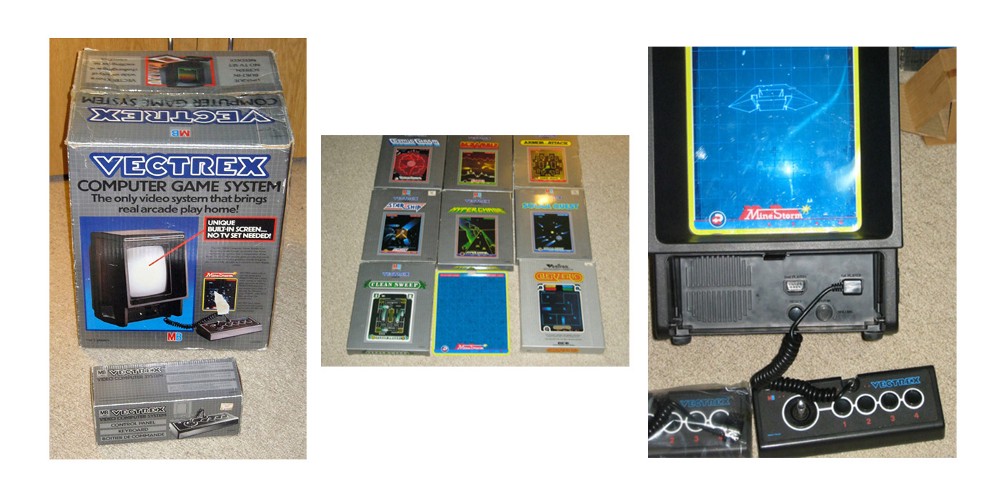 The Vectrex is powered by a Motorola 68A09 chip running at ~1.6Mhz. On the system-board is 1Kb of RAM (1 Kilobyte) and 8Kb of ROM.  4Kb of the ROM was taken up by the built-in game “MineStorm”. All software runs from cartridges and most only use 8Kb ROMs even though the address space available was a much higher 64Kb. A Samsung 9″x11″ black and white CRT screen completed this all-in-one unit, eliminating the need to connect the system directly into your TV.

Having a built-in monitor at that time meant that the main TV of the house remained available for others to watch soaps or sports. This was a BIG thing in the early 1980s.

On the front of the system are two input connections. For example, you could connect either a 4-button analog self-centering joystick or a light pen. The Vectrex case was also unique as it gave one joystick the ability to neatly snap-in for easy storage.

All of the games on the Vectrex feature vector graphics. Even with the built-in black and white screen, the developers still wanted to achieve in-game colors. This is where those very unique screen overlays come in. You “clip” one of these overlays in front of the monitor inside the notches and wow, colors! One extra bonus is these overlays tell you the actions each of the four controller buttons performs in that game. Considering the Vectrex specifications, I feel the programming to make Vectrex games is simply quite amazing!

There were only (I believe) 28 officially released PAL games for the Vectrex system between 1982 and 1984. Many Vectrex games were quite hard to get in Australia and some games were not even released in Australia at all. A fairly healthy “home-brew” game community exists and new titles have been released, including multi-carts and arcade clones. This quite possibly makes the Vectrex one of the easiest (by the low number) yet also one of the hardest systems to obtain a complete official game collection for.

Vectrex Games — Six of the Best

As the Vectrex was my first cartridge-based home games system, I spent quite a bit of time playing on it. My family owned 8 officially released titles and there were a few titles I would have loved to have played but I didn’t get the opportunity to experience those until emulation came along — namely Fortress of Narzod and Star Hawk. With that said, here are the six games that to me define gaming on the Vectrex system:

The Vectrex unit had a built-in game named MineStorm which is essentially an Asteroids clone game with mines that are geometrically shaped. The mines move off the screen and reappear on the opposite side. This gives the appearance the screen is a continuous play-field which is also present in Asteroids. The Hyperspace function (Escape) can assist you in avoiding collisions by jumping you anywhere on the screen. Use it carefully as sometimes you will land right on top of a mine after using it.

The Thrust button propels your craft forward as you press the button and it ceases when you release the button. With no brakes, too much thrust often means you will have a collision path straight into a mine. Overall it is a fairly good built-in game and one that gets quite difficult from Level 7 onward. There is also a programming bug in the game if you manage to get to Level 14!

You control a special craft that has a laser, drill and defense shield inside a space station. Using the map, choose a path from one room to the next to progress towards the central chasm. Inside each room, you must destroy the enemy while avoiding the room’s core which throbs and expands. After the enemies are destroyed, exit the room by carefully drilling through the force shield to continue on.

Once you reach the central chasm, you must plant a bomb to destroy it and escape quickly. The fastest way will be retracing your path back to where you started to escape the explosion. You then progress into harder levels each time you complete a level. I had a lot of fun with this game. 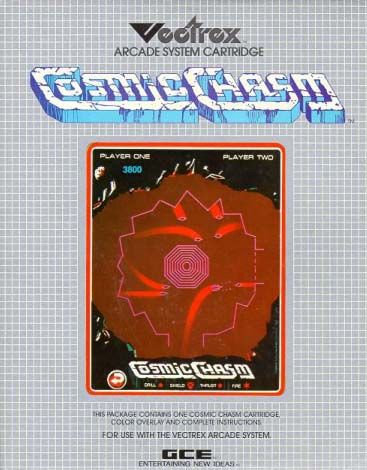 Solar Quest is another game based on the Asteroids genre. You control a space ship and you must shoot as many alien ships as possible. A twist to this game is you get bonus points rescuing any survivors before they are crushed by the sun’s gravity. You can spin your ship in a circle as well as using thrust and hyperspace exactly like in Asteroids. The addition of a Nuke handily destroys everything on-screen in its path. There are various types of enemy ships to destroy and some do not fly in a standard flight pattern. This game has enough differences to Asteroids to keep this interesting. 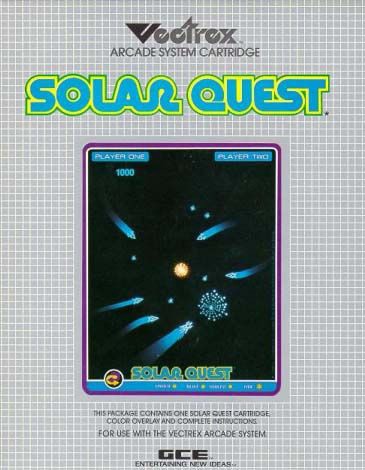 Armor Attack is a birds-eye view game in a town in the midst of war, where you control a jeep doing your best to defend what is left of the city. Your jeep must stop tanks and the helicopters that fly overhead. The choppers enter and exit the screen at any point, and this keeps you guessing. When cornered, you can try to use the buildings to assist your cover, but you must evade and eventually destroy the jeeps and helicopters to progress to the next level. Tanks require 2 direct hits as the first hit will only immobilize them but they can still shoot at you. I enjoy watching the helicopters spiral out-of-control once they are hit. 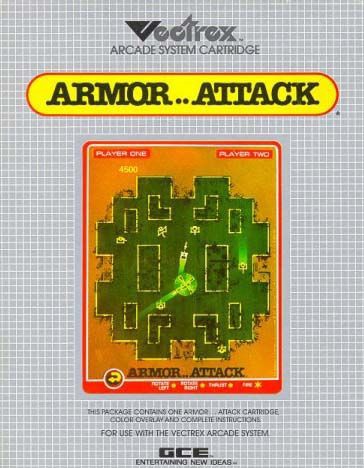 Hyperchase is an extremely quick time trial style racing game. Considering the processor speed of the Vectrex, this is brilliant programming. The way the scenery moves as you speed along is quite masterful. You control an F1 style racing car with 4 gears and to do well at this game, you need to be able to control the car and effectively change the gears. You must avoid any traffic with careful steering as it is very sensitive.

Where this game is different is the perspective of the road changes as you progress. This means you must adjust your steering style, adding to the challenge. As a result of failing to adjust your steering will see you crash or be cleaned up by another vehicle. The challenge of beating your previous time keeps you going back to try to better your current best time. Great fun. 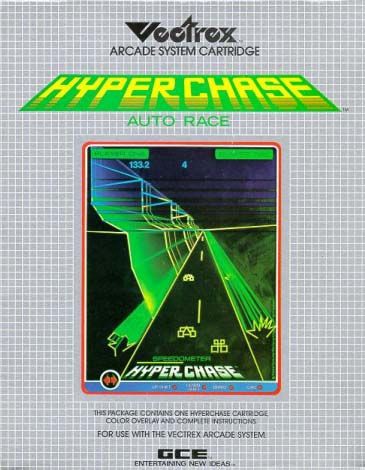 The last game on my list might be controversial as I have left off a few well-loved titles. This game has a certain appeal that kept me returning for more. I feel it might be the cockpit view which now reminds me of Elite, another of my favorite games. The aim of this game is to clear each level by firing at enemies and importantly using your shield sparingly. You can see how much is available via a horizontal line at the bottom of the screen.

You need to dock with your mother-ship (UFO) by lining up the yellow cross-hair. It offers a challenge with the rotating square door and you need timing while pressing your power link button. Be careful not to fire at your mother-ship or you will be in trouble. Each level ends with a challenging boss that is both rewarding and at times frustrating to defeat. 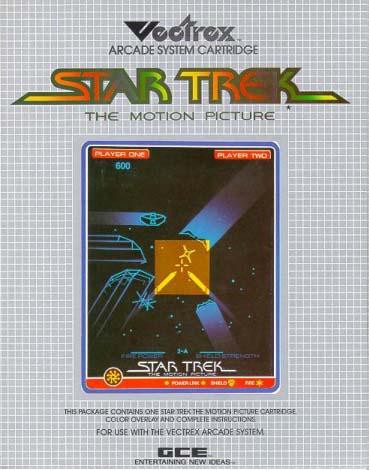 Here are some more Vectrex games that I recommend looking for on the Vectrex system:

Today, from time to time you will find Vectrex units and cartridges on eBay and in other retro gaming goldmines. A fairly active home-brew game community exists too and you can get games on cartridges via various enthusiast groups. If you prefer FPGA, I strongly suggest you try the MiSTer project for all your Vectrex needs. If emulation is more your thing, attempt emulation via MAME or VECX on Mac and Windows, or via the wonderful RetroPie project. Have fun!