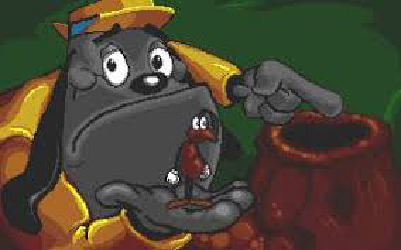 Many times at Ocean when you were working on a specific project you would be asked to contribute to something else that was either late or needed artwork in a hurry. This wasn’t the case in regards to Pushover.

My first encounter with the game was when myself and a few others were asked to come up with some pun names for characters in a puzzle game containing ants, the names had to also end in -ant. Originally there were going to be a few different military characters in the game with different abilities. It was more difficult than you might think, especially as this was in a time before the internet. G.I. Ant was supposed to be the leader of the squad and we probably came up with names like Mutt Ant, Brilli Ant and Triumph Ant. At this point all we knew about the game was that it was a puzzle game with ants in it.

We mulled this over for a couple of days and wrote down our creations before we handed them in to Gary Bracey – our manager. I think Simon Butler may have even done some concept sketches for the different characters although I’m not 100% sure of that. 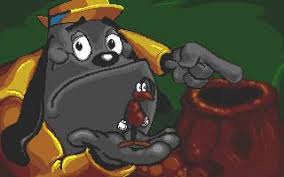 Weeks went past and we heard no more about this infamous puzzle game, until myself and Jon Palmer, another Ocean artist/animator, were called into Gary’s office. We were then told that the Pushover game was almost complete but had recently had a Quavers licence slapped on it and at that late stage of development it would be too much to ask the developers to change the graphics to incorporate the branding.

Gary’s solution to this was to ask Jon to make a full-screen intro animation with G. I. Ant and Curly Colin, the mischievous mutt, and asked me to create eight small animations to break up the gameplay and remind the player that the game was sponsored by Quavers. We were given about four weeks to do this.

A pre-existing background image was sent to me and I was given the artistic freedom to do what I wanted, also with not much in the way of direction. The first three cut-scenes were pretty tame, just different ways the ant presented the Quavers to Colin but after this I got a bit ‘antsy’ and decided to see how far I could push the concept before getting in trouble.

I had previously worked on a ZX Spectrum game called WEC Le Mans which was a 24 hour racing game. In this I had to do an animation of the car spinning on it’s axis for when you run into another car. When I started work at Ocean I’d never done animation so I had to learn from watching animation videos and trying to pause the tape at specific frames to understand the mechanics of animation.

I had always been a fan of Chuck Jones and his work at Warner Brothers so I copied a lot of his techniques including ‘motion lines’ or whizz lines as they were called. I used this method on the car spinning around and it worked really well, the spinning looked smoother and gave the illusion of using more animation frames, so I sent off the graphics to Sentient Software to put in the game. However their artist thought that my graphics had been corrupted and erased all my whizz lines and reduced the number of frames in the animation. I wasn’t happy, but Pushover gave me a chance to try again.

My Curly Colin animations got more and more ambitious and wacky as I progressed towards the last one in which Colin produces a raygun and destroys the anthill in which G. I. Ant has been hiding. I was almost expecting to be told to tone them down but it never happened, the more silly they got the more people seemed to like them. 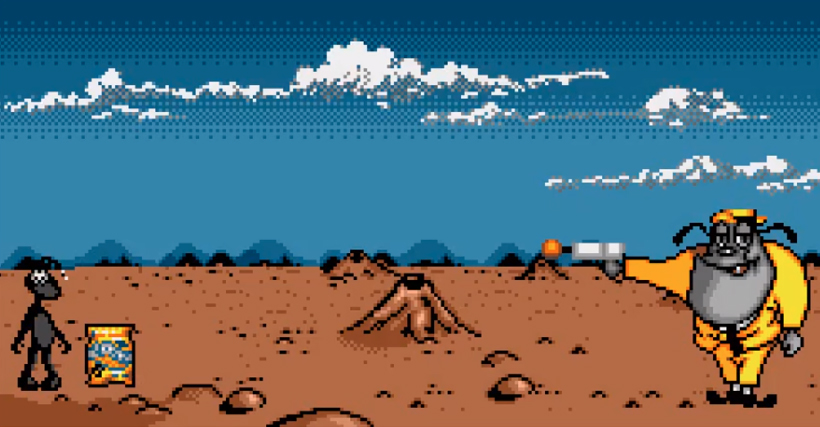 Many weeks passed before we saw our work in the finished game. We had quite wrongly thought that the game would be dull affair which needed some graphical pizazz to spice it up but we couldn’t have been further from the truth. It was a totally original and addictive game that a lot of us actually played in the office in our spare time, which was unheard of.

Years later when I was doing some game development on the iPhone I remember speaking to Gary about how we could remake some of Ocean’s old titles and bring them to a new generation of gamers. A lot of them we couldn’t do anything with since they were movie tie-ins but he did say that we should remake Pushover as it was not only a great little game but it would also work with a touch-screen to move the pieces around. Like most things it didn’t happen unfortunately but luckily nobody else has done it, so there’s still hope that a new version of Pushover might become a reality.

6 thoughts on “A Life on the Ocean Waves – Pushover”