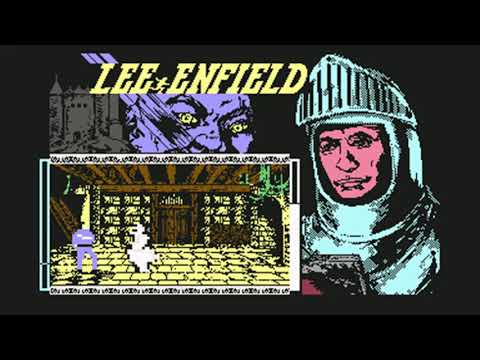 Fortunately, Lee Enfield in The Tournament of Death was Never On The Amiga.

I remembered seeing the 8% review for Lee Enfield in The Tournament of Death in ZZAP!64 back in the day (June 1998, I was 16). This game received comments like “vile”, “gaudy” and “flaccid”. How hideous could this game truly be?

I recalled seeing this “mullock” on a Commodore 64 at the Cannon Hill Commodore Users Group (CHCUG in Brisbane, Australia). No one at CHCUG was asking to “borrow” this game — something very unusual for user groups at the time. This game was part of the Time Trouble Shooter Series — “trouble” should have been a red flag.

Let’s get some background on this game

Lee Enfield isn’t a wrestler from Combat Zone Wrestling’s “Tournament of Death” challenging Conor Claxton and Masada. This would have made for a far better game! Sadly, this tournament didn’t exist until 2002 so it’s just wishful thinking.

Unfortunately, Lee Enfield is just a knight. This story takes place in the 13th century in the Castle of the Count of Savoy. Inside the Castle, a Holy Shroud is being guarded by the soldiers of the “Yellow Shadow”.  Lee Enfield must find this relic in the Castle before his sworn enemy destroys it.

The theme of the game sounded fine I guess. I admit I was at least a little intrigued about this “Yellow Shadow”. With this in mind, I’ve revisited this game and looked a little into it’s story. Ultimately it’s time I will never get back — but I did discover a few things that were more interesting than the game:

1. Lee Enfield is a type of a bolt-action rifle

3. Bob Morane is the eponymous protagonist in a series of French adventure books by Belgian novelist Henri Vernes.

4. Bob Morane books included a villain named Mister Ming, the Mongol genius. If you couldn’t see it from a mile off, he is the “Yellow Shadow”.

6. This game meandered it’s way onto the Amstrad CPC and the Atari ST systems and stank there as well.

7. Other Bob Morane games were made for the Thomson T07, Atari ST and the Commodore Amiga has Bob Morane: Operation Neptune!

As those confusing facts are more inspiring than this game, shall we play this binary swill?

To begin with, you will see a static picture of a knight in green armor on the right side of the screen. At the top is what looks like a blue vampire and a yellow italicized phrase Lee Enfield. Indeed all very exciting stuff.

In the bottom left of the screen is a small yellow and black rectangular area. On it’s left and right edges are vertical status bars with no indication what they are for. 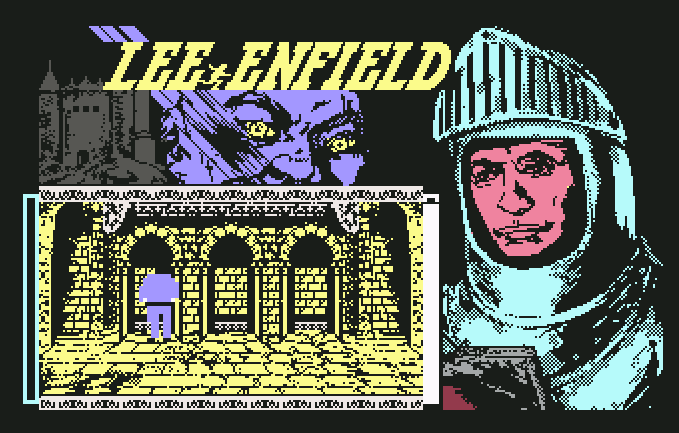 Inside the yellow and black area appears to be a character standing there with no arms and no head! (as shown above). What a great start to this game, instantly shattering any hope you might have had for it. When the character does eventually move, a gray colored head and arms suddenly appear! I really love 8-bit pixel magic!

All of a sudden it becomes apparent that inside this small area is where ALL “game play” takes place! At first I thought the horrid color scheme was to represent the “Yellow Shadow” controlling this castle. However, this assumption turns out to be very wrong. It’s also weird that the majority of the screen is taken up with an ugly static background.

I’ll assume it’s an attempt to hide how poor the character sprites actually are by making them smaller. With the “game play” confined to this small area, it’s difficult deciphering the type of enemy you are trying to stop. For example, I could have been confronting polar bears and umber hulks for all I knew!

Things Aren’t Always As They Seem

Apparently the Atari ST version has facial expressions on the knight that actually change depending upon circumstances in the game. I have yet to see anything remotely close to this on the C64 version. Speaking of the Atari ST version, I saw something vastly different on the back cover of this Commodore 64 game: 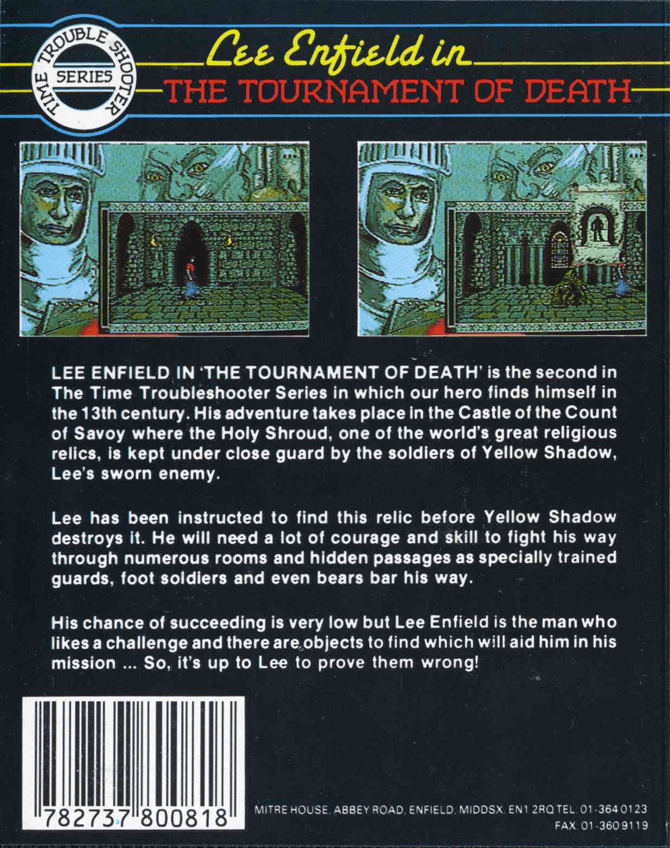 Firstly, you will notice the images shown on the back cover have vastly different colors. In addition, Lee Enfield is now positioned on the left side of the screen. Further, the game play area is larger and on the bottom right. I wondered if this was due to the Commodore 64 version being a very lazy Amstrad CPC conversion.

My research uncovered that the CPC version (shown below) is actually quite similar to the higher resolution Atari ST version as shown on the back cover. Therefore something must have gone wrong with the graphics on the C64 version. Perhaps it was just a last minute rushed port or the developers just had no clue! 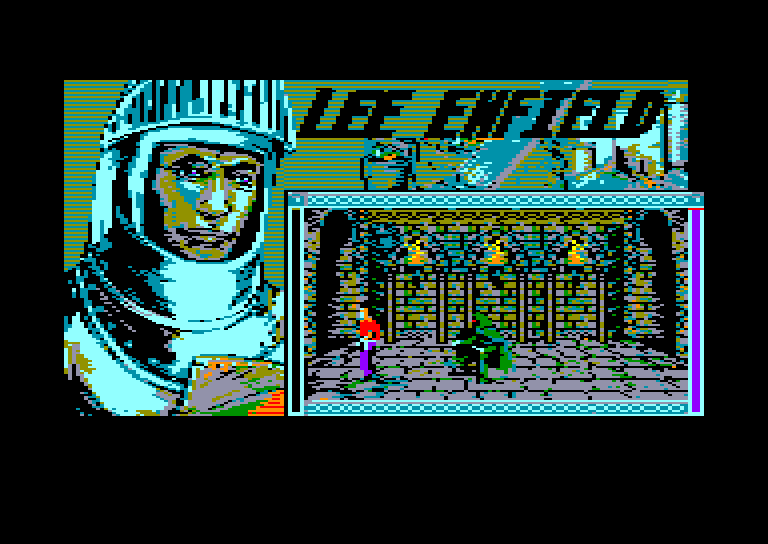 Returning to the back cover, the text has some truths written there. It states that “His chance of succeeding is very low..“. This is ironic as the controls are so unresponsive it’s near impossible to maneuver close to anything. The combat if you manage to make it out of the first room is totally unsatisfying. Not to mention, you just waggle the joystick left to right with random fire button presses.

As expected, this game quickly becomes tedious and you find yourself celebrating when you lose all of your health. At that point, Lee Enfield seems to be teleported inside a space-time bubble that rolls off the screen. After that occurs, you will be filled with delight when Lee Enfield rolls back to the first screen to begin the entire experience again.

Together with horrible screen presentation and unforgiving controls, this games only savior could be its sound. Of course, the music is hideously atonal. A single soundtrack just infinitely loops every 1 minute 42 seconds, and there are no sound effects. You will hear this single “tune” over and over if you are crazy enough to keep this game running for any longer.

Here is some “game play” footage of Lee Enfield in The Tournament of Death that I have taken:

The nature of this music only makes it suitable as an alarm sound to wake even the most comatosed sleeper. All things considered, it’s probably the best aspect of this game — and you owe it to yourself to use the in-game music as a ringtone to annoy everyone around you at work.

In conclusion, with all the major aspects of the game being awful, there is not a lot left to say. Overall this game may even be worse than the infamous Top Banana! This game was released in 1988 by Infogrames, and it was listed with a RRP according to ZZAP!64 of £9.95 for tape and £14.95 for disk. While the best rated Atari ST version only scored a total of 34%, I pity anyone who bought this game.

My ratings for this game are as follows:

Play this game at your own peril. Fortunately, Lee Enfield in The Tournament of Death was Never On The Amiga. Let’s keep it that way.