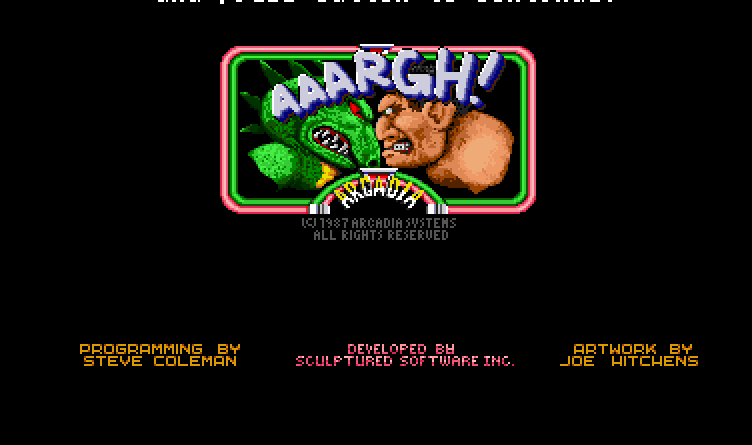 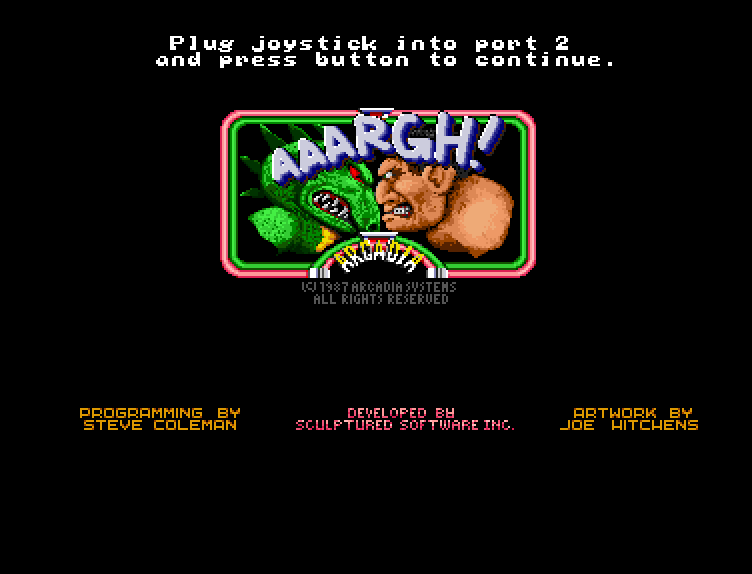 In the early 1980s, home versions of arcade games rarely held a candle to their quarter-munching counterparts. Sure, some of them were fun to play, but home consoles of the day simply were not capable of recreating the graphics and sounds found in arcades. Sure, games like Pac-Man and Donkey Kong on the Atari 2600 sorta-kinda resembled the arcade versions and many of them were fun in their own right, but none of us were truly delusional enough to confuse the two versions. The problem was even worse on home computers, where dozens if not hundreds of Space Invaders, Pac-Man, and Asteroids clones of questionable quality flooded the market. A few of the ports were good, a lot were bad, and some were downright dreadful. As a kid who grew up playing console and computer games in the 1980s, the thought of playing a perfectly-ported arcade game at home seemed like the Holy Grail of gaming.

In the late 1980s, Amiga owners came close with a series of games from Arcadia Systems. Arcadia, a subsidiary of Mastertronic, developed a hardware system for arcade games that ran on a slightly modified Amiga 500 motherboard using a custom version of Kickstart. Daughter boards containing each game’s ROMs connected directly to the machine’s motherboard. Eight games in all were released for the arcade platform, and the almost identical hardware made releasing them for the home market a no-brainer. Of the eight titles, four were sports games, three were space games, and one was a strange game titled AAARGH!.

A year after making its debut in arcades, AAARGH! was released for the Amiga 500 in 1988. While the game’s graphics and sound appear identical to the arcade version, the home version inexplicably removed the two-player option. This is an absolute crime, as AAARGH!, at its core, is a rip off of Rampage, and everybody knows the best part of Rampage is punching your friend and then pretending it was an accident. 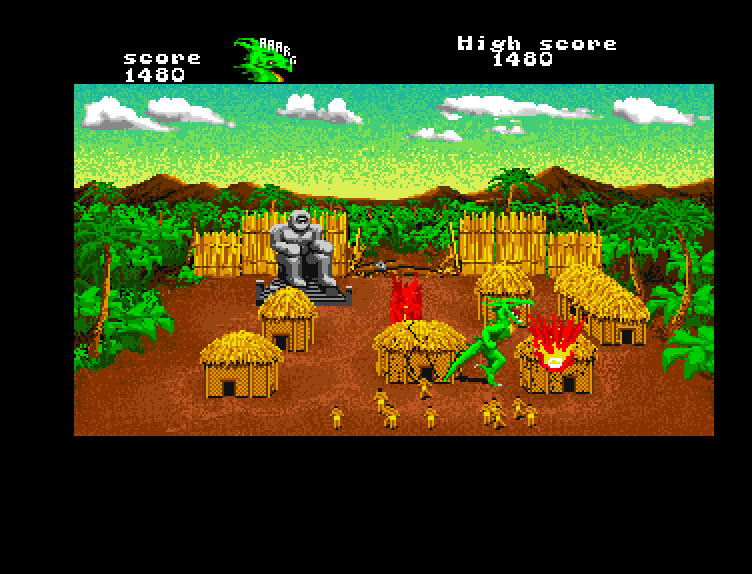 Players can choose one of two characters: a horned ogre, or a hideous dragon. Both characters can punch and breathe fire and play exactly the same. Players will smash their way through a series of unique locations in search of hidden eggs. The locations range from a Chinese pagoda and ancient Egypt to a wild west fort flying an American flag. (The fact that these locations seem to represent moments in time thousands of years apart is not addressed in the game.) Each location consists of multiple buildings and structures that must be destroyed. Inside the buildings players may find food (which restores health), lightning (which restores fire power), or a giant egg left behind by the Roc. The level ends after the egg has been obtained, or all buildings have been destroyed. According to the manual, the egg’s hiding spot is always random, although no matter what order I destroyed the buildings it always seemed to be in one of the last places I looked.

Like Rampage, each level is filled with human beings who are none-too-happy to see their buildings and villages being destroyed by the likes of a monster like you. While destroying their towns, you’ll have to fend off attacks from humans, catapults, and annoying hornets. A quick tap of the button allows either monster to breathe fire, while holding down the button allows them to punch. You’ll need to punch up to take out flying hornets, and punch down to gobble up humans and pick up bonus items. 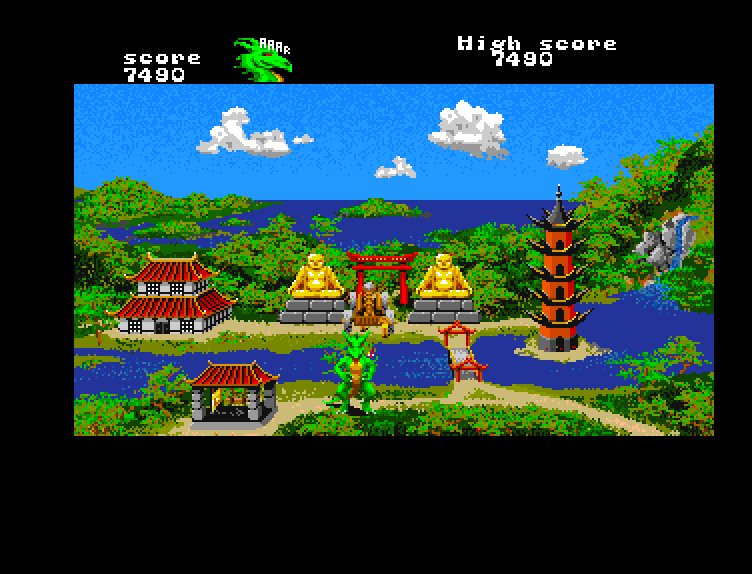 Once the egg is discovered and obtained, the game switches to a monster vs. monster boss battle, in which the winning monster retains the egg. The ultimate goal of the game is to obtain five eggs, at which point you’ll be transported to a volcano where you can attempt to take a golden egg from the Roc and win the game. From start to finish, you should be able to do this in about fifteen minutes.

Like many games, the manual to AAARGH! provides a backstory to the action, but also throws in some oddly specific details. For example, it is explained that all the levels coexist on an island named Darance, the dragon has “a penchant for young ladies,” and the ogre can breathe fire due to his awful halitosis. Also according to the manual, the ogre is “twenty feet tall,” which, if true, makes the human beings in the game approximately two feet tall. Either that, or the ogre is closer to forty feet tall. This is not the only issue with scale the game has. The health-replenishing hot dogs, hamburgers and tacos that frequently appear inside smashed buildings are, assuming the humans are of average human-size, approximately eight feet tall and almost almost twenty feet wide. 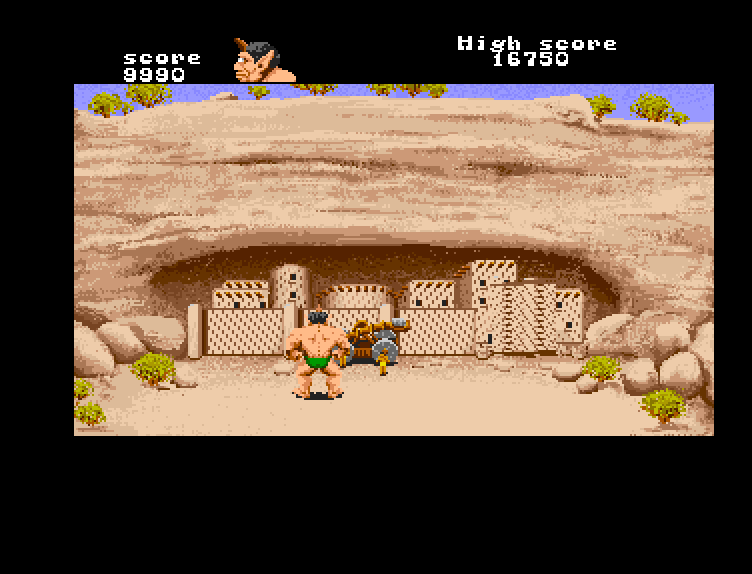 The smashy-smash part of AAARGH! is similar to Rampage with a couple of exceptions. As previously mentioned AAARGH! is limited to one player, and while that certainly doesn’t make the game unplayable, the loss of having a buddy by your side to bash buildings with is definitely felt. The other major strike against the game is its controls. Multiple uses of the fire button (quick presses for breathing fire, longer presses to punch) combined with a pseudo 3D environment make the characters difficult to control. Some buildings are difficult to punch, sometimes your character won’t punch at all, and sometimes your punches don’t connect because your character is too close, too far, or otherwise misaligned with its target. Controls during the end of round “boss battles” are even more wonky. Button mashing and joystick thrashing, my normal go to moves for fighting games, only leads to leaping, fire breathing, and the impression that my poor ogre had ants in his pants. Any eggs I acquired during normal rounds were quickly handed over to my opponent after losing each boss battle.

Can I go back to something? Does it bother anyone else that humans have been creating absurdly large items of food and randomly hiding them in buildings across multiple continents, apparently for thousands of years? Like, in your wildest dreams, did you ever imagine that some secret organization was constructing tacos the size of a large pickup truck and placing them inside golden statues of Buddah and ancient pueblos? And then, hundreds of years later, members of that same organization grilled a gigantic hamburger, complete with giant slices of tomato and sheets of lettuce, and crammed it inside an old western fort? Don’t you think that at some point in time, someone would have stumbled across one of these giant meals? Why are they doing this? Are they still doing this? I don’t know, man. It’s weird. 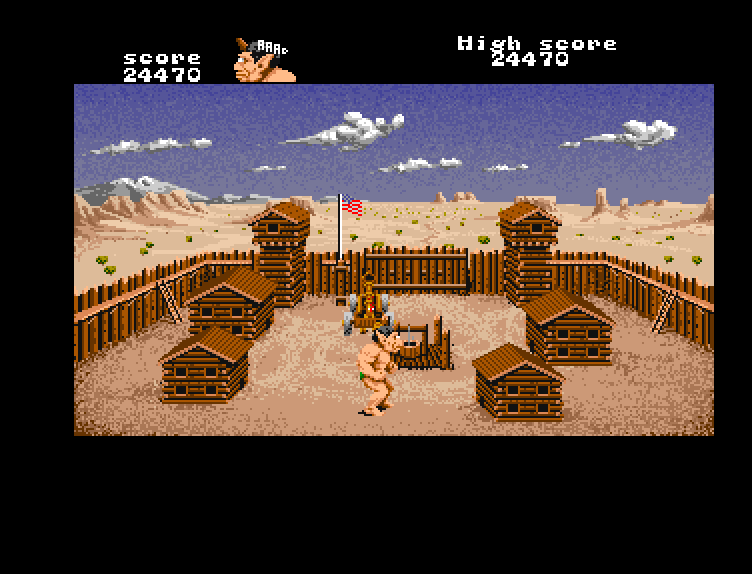 Marketed to Amiga 500 owners, AAARGH! shipped on a single floppy which unfortunately adds load times anywhere from thirty seconds to a minute between levels. While that may not seem like much, when each level can be beat in two to three minutes, the blank black loading screens between them add up.

The best thing one can say about AAARGH! is that those of us who grew up playing inferior arcade ports at home finally got our wish. Save for the removal of the two-player option, AAARGH! on the Amiga is essentially indistinguishable from the arcade version. The entire game has sound effects layered over background music, and the graphics are colorful and detailed. The controls take getting used to, but the game is certainly playable, and until repetition sets in, kind of fun.

Did I mention I found a gigantic slice of pizza inside an ancient Indian temple? Why were tiny people in India making oversized Italian food? It’s all so weird! 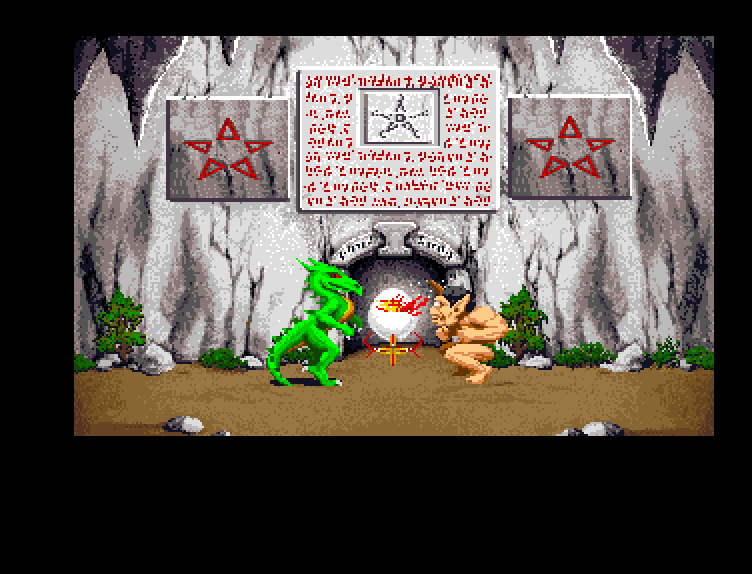 One thought on “All That Blitters: AAARGH!”