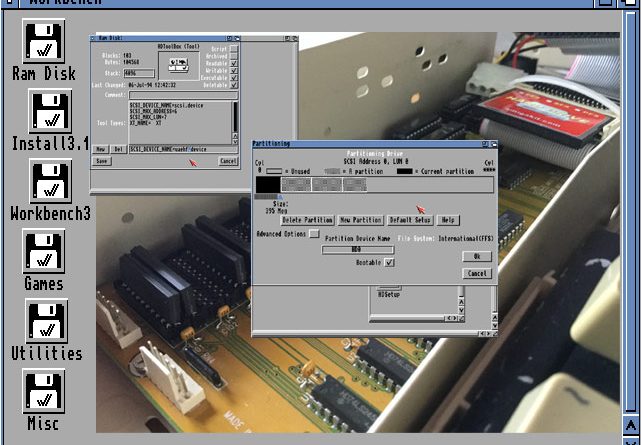 This is a follow up to my efforts on installing a Compact Flash drive in an Amiga A500+.

My initial aim was to replace the Alfapower hard drive enclosure which would reduce the overall footprint of the system and do away with the constant whine of the hard drive.  At this point I was able to get the Amiga to boot from the Flash drive while attached to the IDE port on the Viper Accelerator. 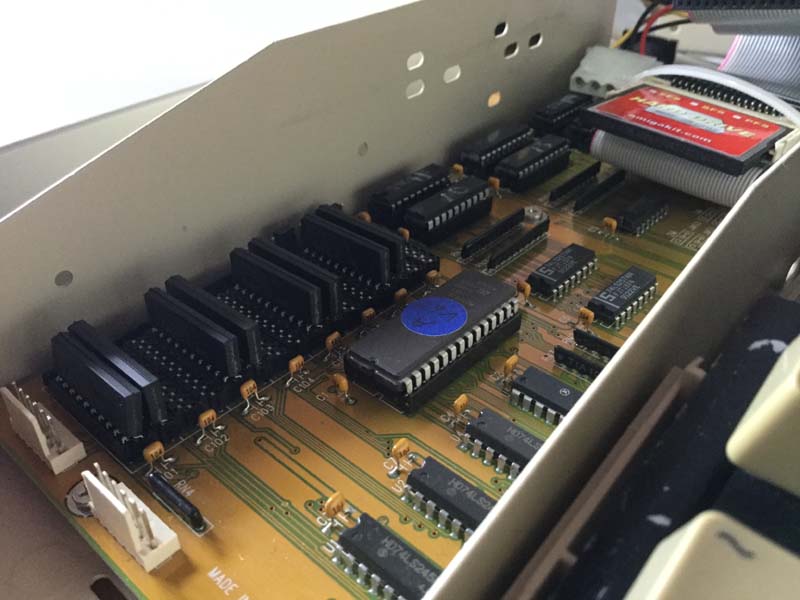 In the image above I have removed the old hard drive and installed the CF adaptor. You can see that the hard drive enclosure also contains 4mb of Zip ram chips.

The move raised another issue. At this point the only CF card I had was a 4gb card and all that space was being used by the 3 partitions. Only the boot partition was recognised as usable, the other two classed as NDOS. This isn’t the case when it’s plugged into the IDE port on the accelerator. A quick look online suggested that the IDE interface may not read past a set limit and any partition that crosses or is beyond that limit cannot be read.

I decided to purchase another CF card to experiment with. This would mean that the bootable CF card was preserved.  I attempted to get WinUAE to read the new card so that I could create smaller partitions. This didn’t work and after some online searching I concluded that I needed an ADF image of the Workbench Install disk. I purchased yet another CF card, this one came with Workbench preinstalled. The biggest help was that it also came with the Workbench 3.1 discs in ADF format. Stroke of luck.

WinUAE could read this new card straight away and I copied the Workbench ADFs  to a PC folder that WinUAE was using as a drive. This was great as I now had a bootable Workbench Install disc with HDToolbox.

At this point I found a possible reason why HDToolbox couldn’t find my previously assumed incompatible CF card. WinUAE uses a SCSI device name of uaehf.device instead of scsi.device and so this needs to be changed in the HDToolbox configuration.

Back to WinUAE which I configured to boot from the Workbench Install ADF image.The CF drive was mounted as a Hard Drive. Once booted, I copied the HDToolbox program to the Ram Disk to and edited the icon configuration. This did the trick and the drive could be seen. I was able to create partitions but another obstacle was encountered when I went to save the changes. Seems WinUAE couldn’t write to the drive while it was still mounted on the PC. I tried a couple of things but in the end I had to use Diskpart to clean the CF card, this appears to remove the filesystem from the drive. I rebooted WinUAE and relaunched HDToolbox  and this time the partitions were created.

The following is my guide which should turn any CF card into a usable, bootable drive that can be used on real Amiga hardware.

How to Clean your Compact Flash card:

You should only need to do this is your CF card has been formatted by something other than Workbench.

How to boot WinUAE and format your CF drive:

Your CF drive is now ready to be used in your real Amiga. You’ll need to install Workbench on it which you could do using disks on your Amiga or using ADF images on WinUAE if you have them.

I didn’t manage to reduce the footprint of the system as I still need to have the Alfapower enclosure attached. I could move the CF card back to the internal IDE port on the accelerator card but that would mean losing the CD drive. It has been a bit of a struggle to get to this point. I now have my old, 4 partition, 320mb system hard drive copied over to a CF card with 4 partitions that add up to just under  1Gb.

On my 2nd attempt at creating 4 partitions that all fit within the IDE interface space limit I noticed something odd. After having previously loaded the CF drive with files and then having to re-partition I found that the Quick Format left a few files and folders behind from the previous set up. A full format from the Workbench disk fixed that.

I decided to use the short IDE cable on the CF adaptor and have the CF drive poke out of the rear of the hard drive enclosure. It’s not very neat but it will allow me to easily swap CF cards…..maybe I will set up a dedicated gaming card. 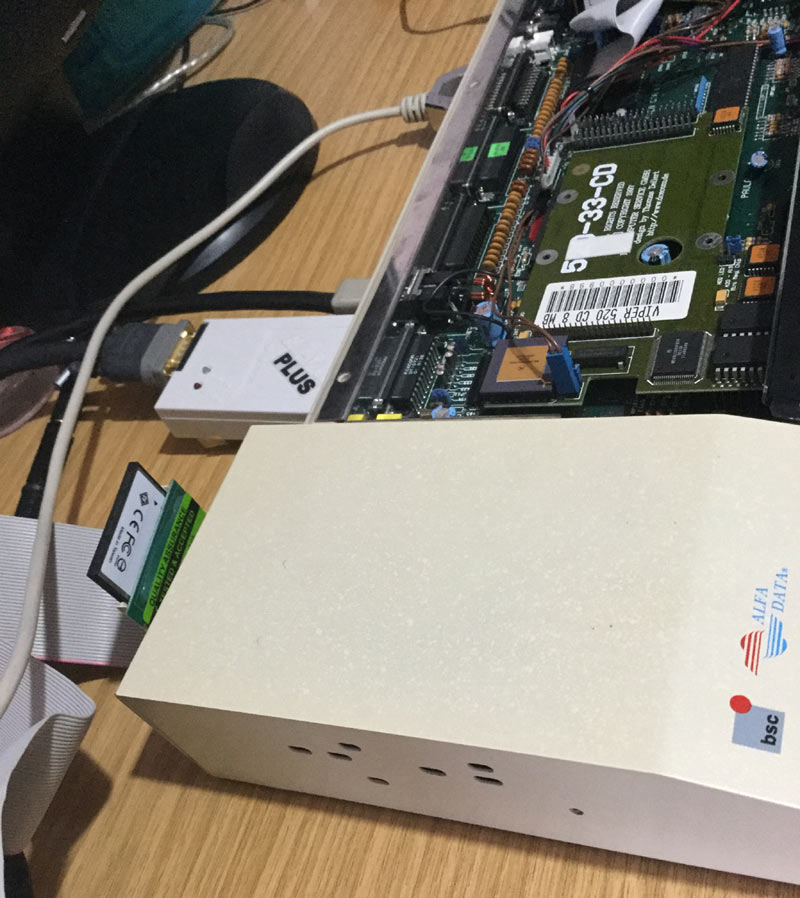