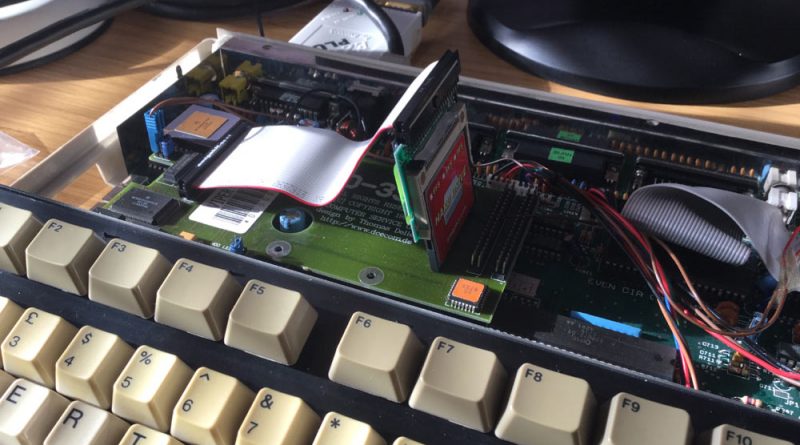 I have been watching the Amigo’s podcasts for quite some time now and even though John and Aaron did inspire me to start using WinUAE again I admit that I have only setup and switched on my A500+ once in the past year just to see if it still worked. Before that it just sat in my cupboard for years. More recently though I found myself wanting to get back to using the real hardware so I have started taking steps.

My Amiga A500+ has an Alfapower hard drive enclosure attached the side expansion port. It must be at least 22 years old now and still has the original hard drive (320mb I think). Works well but the spinning and the head movement makes more noise than I remembered. I thought that maybe I should look into a way of backing it up or replacing it before the worst happens.

There is also a Viper accelerator board fitted inside the A500+ case which has both 2.5″ and 3.5″ IDE connectors which have never been used. I decided to try connecting a Compact Flash drive to the Viper board to see what would happen. I purchased the IDE to CF adaptor from Amiga Kit. They offer two versions, one for the A600 and one for the A1200. I went for the A600 version as I wasn’t sure what the difference was and the A600 is closer to the A500 than an A1200. Opted for 12cm of cable in case I needed a bit of wiggle room to make it fit. Turns out I didn’t need such a long cable. 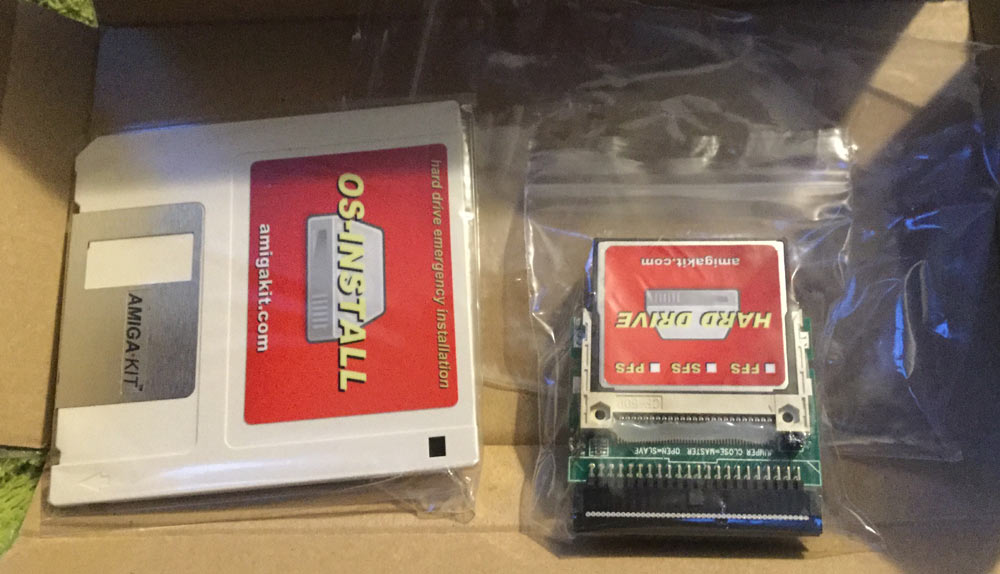 It took about a week for Amiga Kit to deliver the adaptor which is what they stated on their website. Nicely packed and it comes with instructions and an emergency install floppy disk. The drive comes pre formatted and partitioned and has software to guide you through the set up.

I removed the Alfapower drive from the side expansion and installed the CF drive onto the Viper card. 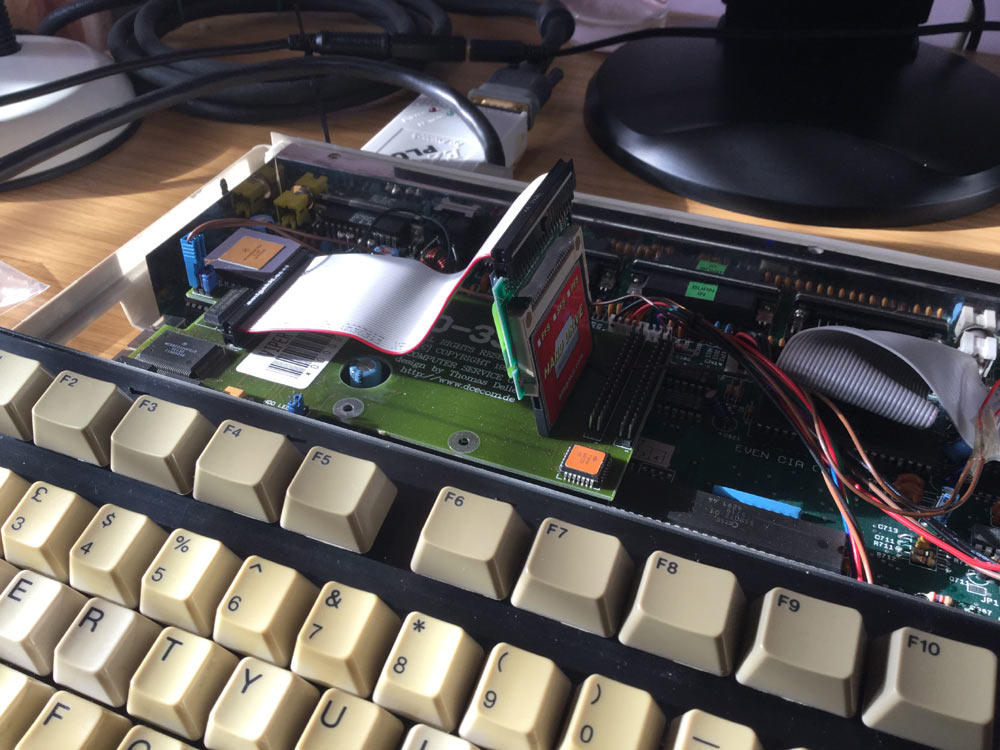 Leaving the top off the A500+ I switched on and was happy to see that the drive was recognised and booted up. The installed software asked me which version of AmigaOS I wanted to install and after selecting 3.1 it asked me to insert the disks one by one. 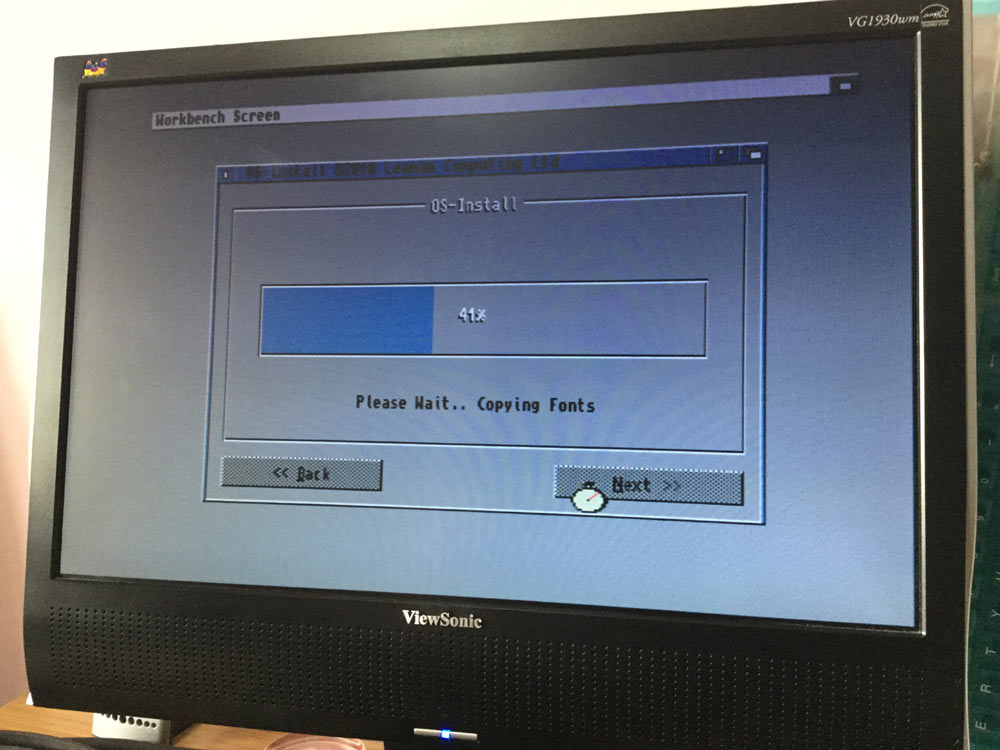 Didn’t take long and I was asked to remove the last disk and reboot.

There is an Amiga Kit splash screen during boot and if something goes wrong you can apparently hold down the O key at that point to reinstall the OS or you can use the supplied floppy disk mentioned above. 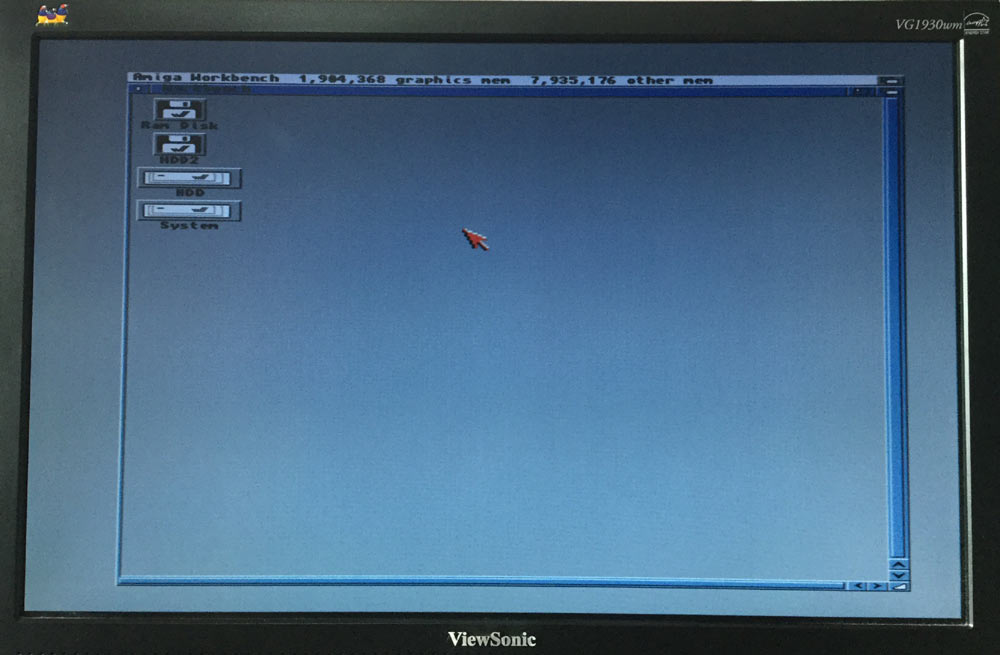 Great stuff. I was expecting to have configure something on the Viper board but was happy that it worked first time and worked well. Workbench boots quickly.

Next I wanted to see what would happen if I reconnected the Alfapower drive. Turns out that the Alfapower took priority on boot and I was back to my old green Workbench screen.

Happily, the new drives on the Compact Flash drive were also present. Fantastic, I could now go about copying the data I wanted over to the new drive. In the end I just made complete copies of all 4 partitions into folders on the new drive. Its got 4gb of space so why not. 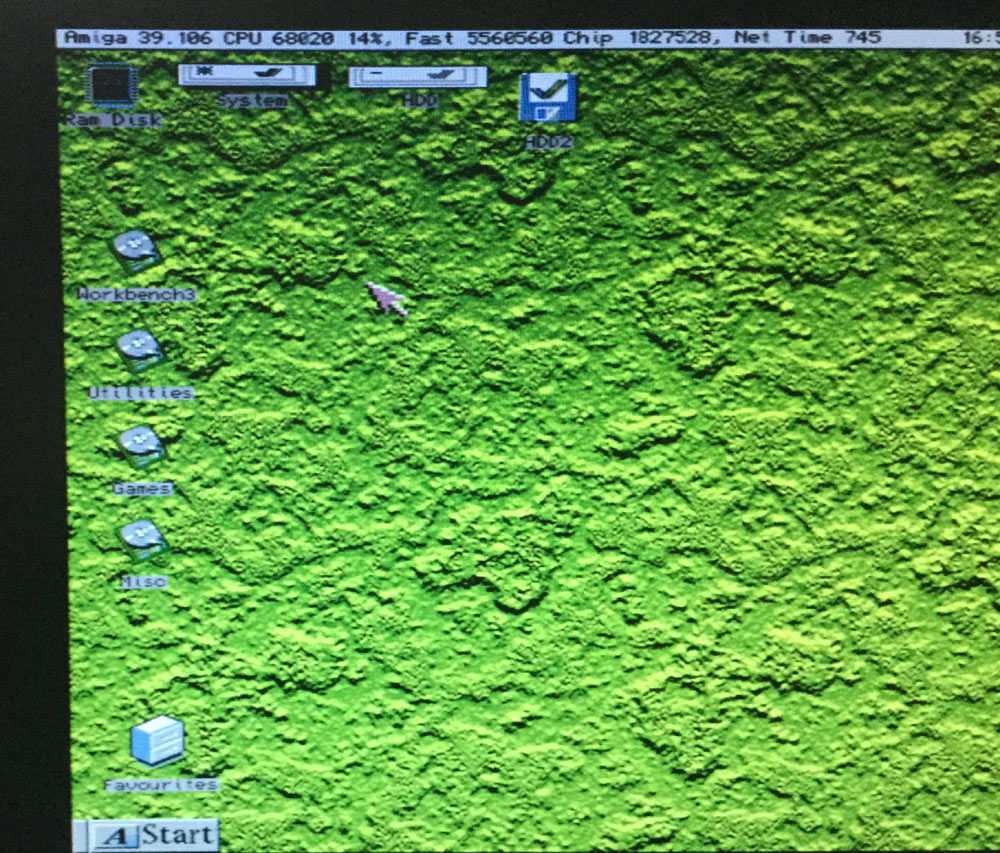 In the picture above you can see the old partitions down the left and the new 3 at the top. 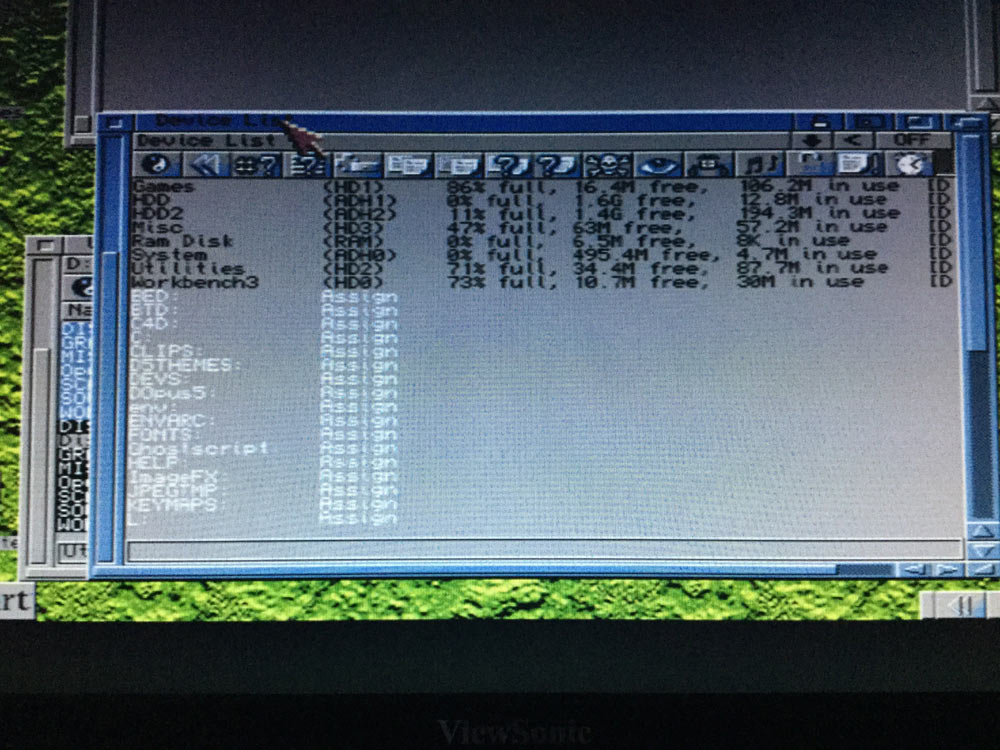 I then went back to the new install of Workbench and began to tinker. The floppy drive clicks every second or so on an Amiga as it checks to see if a disk is inserted and I knew that I had installed something on the old set up to stop that. A program called Toggleclick lives in the C folder and a line in the startup sequence runs it on boot. I copied this over. I also copied all the extra library files over as you never know when they will be required. It has been a long time since I last used an Amiga, emulated or otherwise, to do anything other than play games or demos.

My Alfapower box also has a CD drive connected via an IDE cable. In the near future I want to see if I can connect that directly to one of the other IDE connectors on the Viper board. If it works then I can reduce the footprint of the whole set up by removing the Alfapower box. My problem is that the Viper board connects to the motherboard via the 68000 cpu slot. It is a fairly robust connection but a long cable hanging out the side of the case connected to the CD drive could cause the board to wiggle free. I have been looking to see if I could make a short cable that goes to a case mounted IDE connector but haven’t found a connector suitable yet. It also means cutting into the case which past experience tells me I could easily mess up. So I suppose the easiest way would be simply unplug the hard drive in the Alfapower box and just use it to connect the CD drive.

Something else I was wondering about would be copying the old Workbench set up to the flash card. This would need me to create a 4th partition and copy my backups. I’m not sure if I would have to blank the CF card to do this. I have been told that it is possible to use WinUAE to set up the card so I might look into this. To my shame I have no idea if my PC even has an IDE port to use or maybe I could just just buy a Compact Flash reader.

This experience reminded me why I loved the Amiga so much, its just fun to try things with it.

Anyway, I thought I would write this just to let people know that it is possible to add an IDE to Compact Flash drive adaptor to an Amiga A500. You just need the right kit to do it.