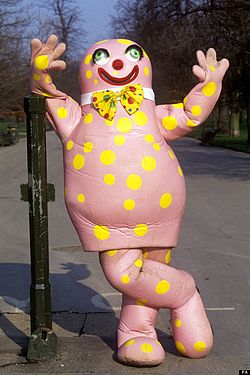 That’s correct, the annoying purple git himself got an Amiga game and not only that by some weird chance of fate I am in some developer groups with the coder of the game and he has been kind enough to answer a few questions about it which I will post below the video.

How did you end up working on a Mr Blobby licenced game ?

It was my first job in the industry.. I cannot remember the exact details but I had been meandering around the office for a few weeks before I was told I would be porting Super Troll Islands from the SNES.

Mr Blobby & Troll Islands seem to share the exact same engine with a graphics and sound switch, which came first and were you involved in Troll Islands also ?

After working on the game as Trolls for quite some time it was then reskinned as Mr Blobby and the Megadrive version (which was in development by somebody else in the office) was canned and they decided to just go with Mr Blobby.

The game really only works on keyboard as you need three fire buttons, was it primarily designed as a console title ?

It was a port of Trolls and the spec was “make this on that” so the lack of fire buttons had to be dealt with by keys on the keyboard.

Are there any easter eggs hidden in the game ?

Only things that have already been discovered such as entering DBUG in the level code section.

What was the total development time of the game ?

I cannot really remember… it might have been 6 months originally and then a 3 month extension for Blobby, or something like that.

Thinking back to programming the Amiga compared to other systems at the time how did it compare for you ?

It was my first programming job in the industry… everything was much harder back then.  We had support in the form of informal chats with people we knew at Gremlin Graphics but the reality was that you needed to code everything yourself from the ground up.

There was no internet and there was nobody else in the office who had a magic library of code to cherry pick things from so I basically wrote everything in the game except for the sound effects and the music driver which was written by Richard Joseph.

I have several Amiga’s and generally use them for tinckering about, watching demo’s, occasionally play the odd game now and again.

adapter that I have meaning that I can now use SD cards up to 128gb (which is nice, but overkill for Amiga) http://www.indieretronews.com/2017/01/pcmcia-angle-connector-and-sd-to-cf.html

You have worked dozens of games in your career, which game are you most proud of ?

Sand Slides on iOS is what I am most proud of I guess as it was designed + programmed + self published by myself.

I also wrote everything from the ground up (much like Mr Blobby!) and it did really really well when it launched… The game had over 5 million downloads over its lifespan.

What are you working on now and do you have anything you would like to plug ?

I’m currently contracting but under NDA… But feel free to check out Sand Slides! Now also available on Google Play!

Chris Foulds is UK based indie developer of mobile apps, retro gamer & low end Amiga demo scene programmer from ‘back in the day’.

An Amiga defector in late 1993 to the dark side of the PC returned to the Amiga in early 2013 to rekindle his affair with his first true love and the cruel mistress that got him into all this programming malarkey in the first place.