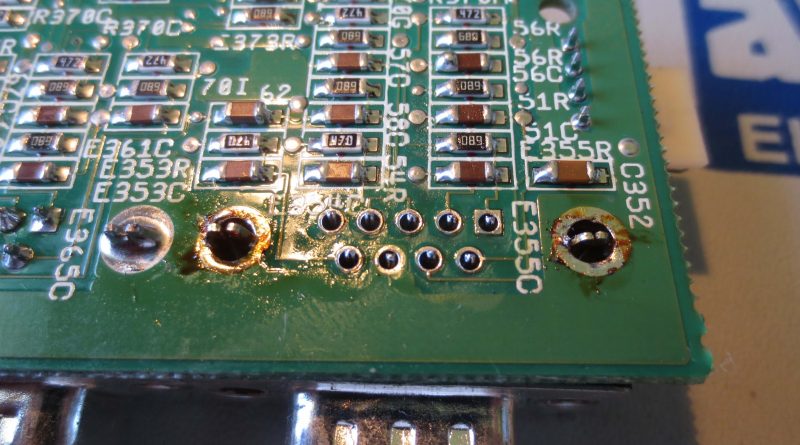 I was playing cat and mouse with an A600 where the mouse was quite jittery and the left button seemed to be unreliable. If the plug was wiggled and held in a certain position and if I held my tongue right, I could get it to work as long as I didn’t breathe. Of course I tried different mice and some of them were worse. Strange! I noticed some of the pins were very loose and sitting in further than the rest.

There was another problem with this machine where the power socket seemed a bit wobbly. Time to tear this one down and to crack out the soldering iron. I removed the motherboard and closely inspected the solder connections. The power socket connections were obviously broken so I re-flowed them but the mouse connections seemed fine and I re-flowed them anyway. After plugging in and testing, I experienced the same mouse issues. The re-flow job seemed to have had no affect on the wobbly pins so I figured they were broken in the socket internally.

I checked the dimensions of a DB9 serial socket from a PC and it was very close, if not identical apart from the colour of the plastic molding. I de-soldered it to use as a replacement and de-soldered the faulty on from the A600. Soldered in the replacement and it tested perfectly. Problem solved – it seemed. When I was plugging in the mouse to test while the machine had it’s clothes off, I noticed near the back of the mouse socket a missing solder pad and it’s mate was bare. I figured there was a component missing and just below it was a similar set of pads with a 4.7ohm surface mount resistor attached. It’s been around three weeks since I picked up these computers and at the time I remember seeing a loose surface mount resistor and thinking I must put that aside, just in case I find where it came from. I grabbed it and it matched the resistor nearby and it also had a solder pad attached to one side. After sitting it in position and lining things up it became apparent this was the matching resistor! I’m glad I put that aside. After measuring it and confirming it was 4.7ohms got to replacing it. The left pad and it’s trace were intact. I soldered a fine piece of wire from under the right pad to the terminal where the trace led. Then I soldered the resistor into place.

While I had the machine apart I took the opportunity to clean the case and keyboard. Then assembled it with its hard drive, floppy drive and extra 1Mb RAM module.

After assembling I gave it a good testing and all is fine so far. I did notice while I had it apart there are a few dodgy looking capacitors. Also a couple of areas that may have been affected by leaking electrolyte but it’s very minor at this stage. It’s on my to do list to sort these issues out.