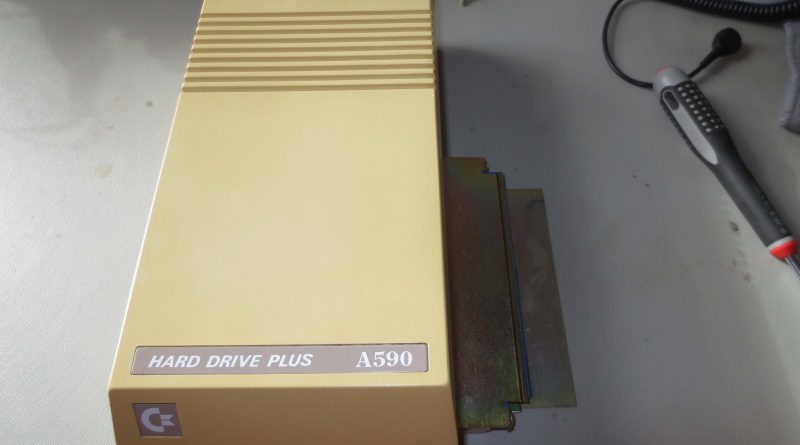 My son and I made the final pick up from my recent Amiga gold mine today. Just the rats and mice and I mean mice literally – tank mice, pregnant mice, and a third party job. Rats were not found but I guess you could call the big track ball units rats. There was nothing overly interesting here, notably a couple of CRT monitors, boxes of disks and some add on cards. I was lining up to put up a post the other day about the A590 hard drive add-on for the A500 but I couldn’t find the power supply. I did not recall seeing it in the items I had already picked up, neither did I recall seeing it in the gear that was yet to be picked up so I was a little concerned I may have to rig something up. However, today when I was loading the car I noticed a power supply that looked a bit like the ones you get with the A500 but a lot lighter and upon having a gander at the power plug I noticed it was not an A500 power supply but more than likely the one for the A590. Time to explore this add-on I had seen back in the day and drooled over but could never justify the expense. First things first – tear this sucker down which was very easy. Four screws and the top came off to reveal the hard drive. I unplugged the case fan and removed another four screws on the bottom to remove the hard drive after unplugging the power and data cables. The jumper on the board indicates there is 2Mb of RAM on board. I had read the manual a wee while back and I didn’t realise the A590 had RAM on board, I thought it was just a hard drive. You live and learn. After assembling it again I plugged it into one of my trusty A500s. First off remove the cover on the left of the machine to reveal the side expansion port. There is a ground clip that needs to be installed into the slot first, then the hard drive attachment plugged in. Plug in the power supply for the A590 and you’re good to go. The A590 power is controlled by the main system power. When you turn on the Amiga the A590 should power up as well. Don’t forget to flip on the switch on the A590 power supply otherwise you will see a green screen on the Amiga with no booting action – speaking from experience here. I flipped the switch and I heard the hard drive spin up but I got the insert boot disk screen. I cycled the power and saw the same screen. Upon powering down and re-seating the drive and powering up again the drive made a different whirring noise and booted from the hard drive but only to a command line where I could list directories etc. I tried loading workbench from there to no avail, rebooted with the WB1.3 floppy inserted and it booted okay and I could read the drive from there. I also ran the disk check utility and found no errors then booted from the A590 set up disk and ran the initialisation program that copies the startup-sequence to the hard drive and that was it. The A500 boots directly from the hard drive to workbench now. This is the coolest sounding hard drive I have ever heard. I would like to record the sound and upload it for people who have never heard this before.

There appears to be around 3Mb RAM total, that’s 1Mb internal and 2Mb in the A590. Time to have a play.

Tried installing Civilisation to the hard drive but it fails with a software failure. It looks like the internal floppy in the A500 is dodgy because it seems to install okay from DF1:. Watch out for more post about this drive.