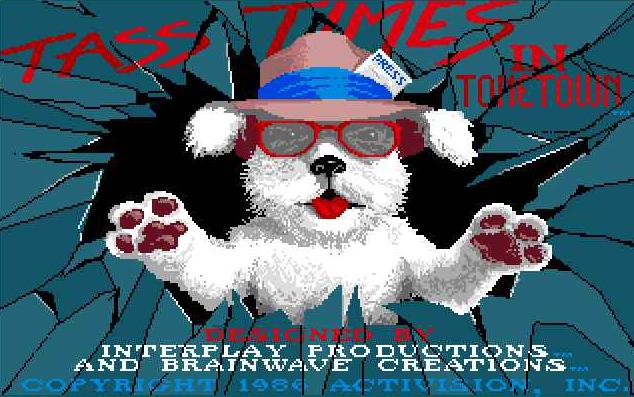 In the fall of 1986, Apple debuted the final computer in their Apple II line, the Apple IIgs. “GS” stood for graphics and sound, and Apple needed an impressive launch title to demonstrate the machine’s new multimedia capabilities. For this, they turned to a quirky new game published by Activision and developed by Interplay, Tass Times in Tonetown, which became the first game commercially available for the Apple IIgs. Probably much to Apple’s chagrin, Activision simultaneously released the game for multiple other 8 and 16-bit computers including the Commodore Amiga, which many people consider to be the best version of the game.

At the time of its release, Tass Times in Tonetown was a groundbreaking graphical text adventure. Early home computers like the TRS-80 displayed primitive graphics, and depended on the burgeoning genre of text adventures for its earliest games. Back then, text adventures consisted solely of text, requiring gamers to use their minds to imagine the locations described within each game. As the abilities of home computers increased over time, so did the adventure genre. Sierra was the first company to marry still pictures with text adventures in their 1980 game, Mystery House. The pictures were little more than crude line drawings, but did enough to convey the game’s locations. Over the next several years, the graphics accompanying adventures continued to increase in quality. By the time Tass Times in Tonetown was released, companies were depending on graphics to sell their adventures. 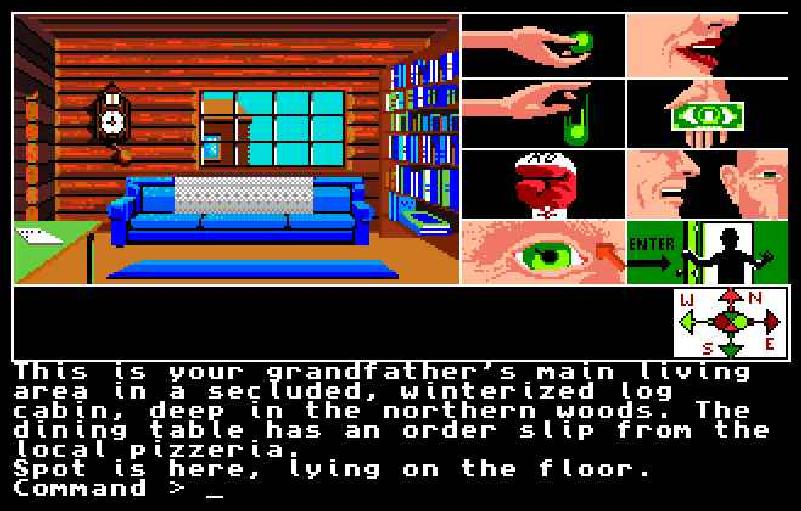 The game’s opening location, an abandoned cabin, provides players a non-threatening area to familiarize themselves with its unique controls. The upper-left quadrant of the screen shows pictures of the player’s location. The pictures are mostly static, but occasionally contain simple animations. To the right of those pictures are a series of clickable “command icons” which act as shortcuts to common commands such as GET, DROP, and LOOK AT. Separating the screen horizontally is a strip that displays the player’s inventory, and a compass that can be used for navigation. The bottom portion of the screen displays detailed text descriptions and has a prompt for typing commands. The pictures and text descriptions aren’t always in sync; for example, characters are frequently mentioned in the text that don’t appear in the graphics. To find every object, players will need to scour both the graphics and the accompanying text.

After exploring grandfather’s cabin, players will quickly discover something is missing: grandfather. Behind a locked door, players find one of Gramps’ inventions — a magical hoop that doubles as a portal to Tonetown, a crazy, futuristic world full of people with wild haircuts and radical clothes who hang out in totally tubular locations. Everyone in Tonetown speaks in totally tass slang, a combination of Valley Girl slang and made up future babble. Denizens of Tonetown wear hooplets, strive to look Troppo, talk on floatfones, and use guitar picks for currency. 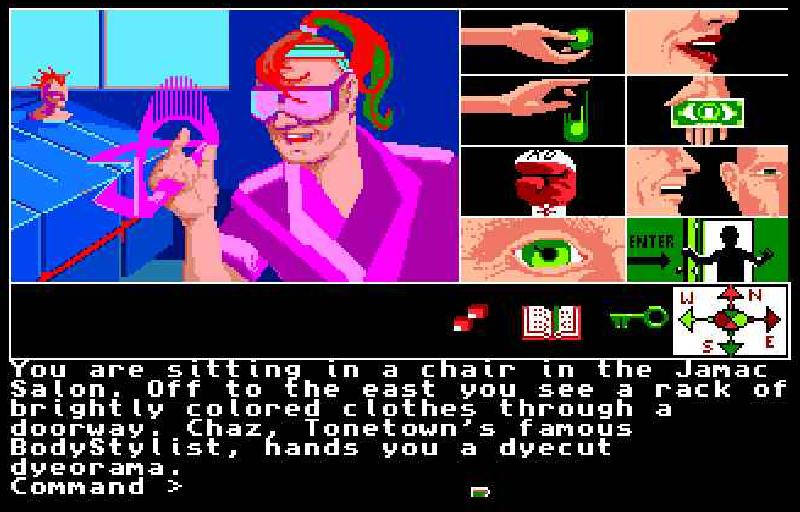 Unfortunately not everything is “tass” in Tonetown. It turns out Gramps’ hasn’t just wandered off — he’s being held captive, and it’s up to the player to rescue him. Like all adventures, achieving this goal involves solving a series of puzzles while navigating through the game’s world. Some of the tasks and solutions are more obvious than others. Generally speaking, the game does a good job of presenting players with specific tasks to complete, but things are much easier if you have copies of the manual and newspaper that came packaged with the game, both of which contain hints and the names of characters you’ll need to interact with.

Adventure games of the 80s were notorious for killing players swiftly, abruptly, and without warning, and Tass Times in Tonetown is no exception. By using the right mouse button, players can access up to ten slots for loading and saving games, and if you plan to make it far in the game, you should save frequently. Tass Times has no problem ending your game instantly for doing things as innocently as moving in the wrong direction or knocking on someone’s door. It’s frustrating that exploring this enticing world, the one thing the game’s colorful and vibrant graphics beg you to do, frequently ends in death. Without the ability to load and save, Tonetown would have quickly moved from merely difficult to completely impossible. 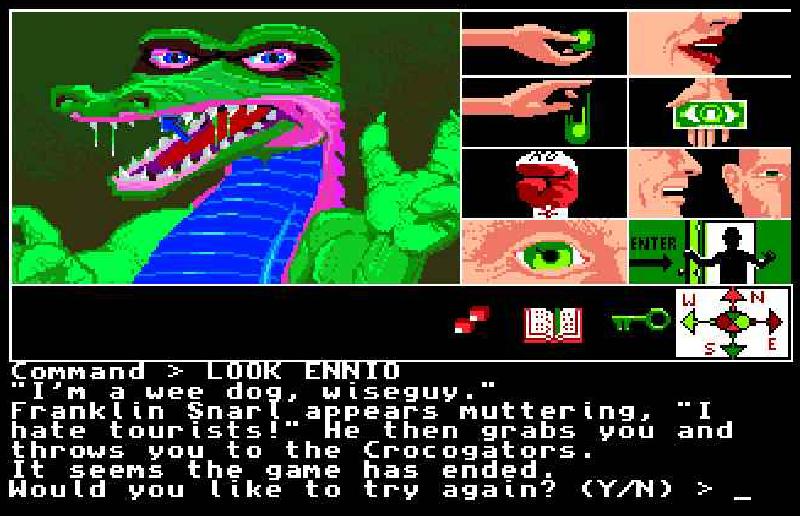 Another (fortunately mostly gone) trope of early games is that they often allowed players to put games in unwinnable states, and Tass Times suffers from this problem, too. In one of the most egregious examples, there’s an object hiding inside Gramps’ cabin in the beginning of the game that is necessary to complete the game. If you fail to find and obtain it, there’s no way to return to the cabin from Tonetown once you realize you need it, and you don’t know it’s required until literally the last scene of the game. That’s not very tass at all.

As a kid, the unfairness of the game didn’t affect me. To me, Tonetown represented a future I wanted to explore and be a part of, even if it was only virtual. I was a member of the MTV generation, and assumed by the time I was an adult every building would be lit by pink and blue neon, everyone would be wearing outfits made from aluminum foil with matching asymmetrical sunglasses, and my doctor would have a purple mohawk. Using guitar picks for currency didn’t sound bizarre to me. It sounded awesome!

No review of Tass Times in Tonetown would be complete without mentioning the origin of the word “tass,” a derivative of the word “Vertias,” Latin for “truth.” “Veritas” happened to be the motto of Harvard University, where the game’s designers Michael Berlyn and Muffy McClung-Berlyn were employed. Over time, “Veritas” morphed into “very tass,” which students began using to mean “very cool.” The “very cool” world imagined by the Berlyns was brought to life by the gifted and legendary programmer, Rebecca Heineman. 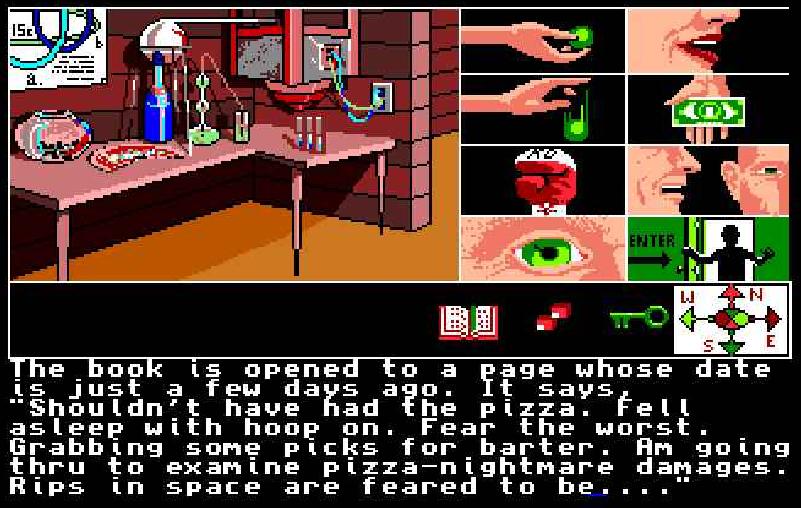 Some parts of the game’s engine work better than others. For example, some of the graphical icons are leveraged heavily while others (taking up a large portion of screen real estate) are rarely used. Every action represented by a graphical icon, including the compass, can also be typed directly into the parser. It’s as if Interplay came up with an interesting new graphical interface, but was afraid to go all in with it. That being said, it’s easy to forget that this game was born when genres were still being defined, and interfaces were constantly being tweaked. Many features, like the ability to click on and interact with objects in the graphical environment were pretty groundbreaking at the time. You can see the evolution of the game’s engine by playing the Interplay games released before and after Tass Times in Tonetown. Borrowed Time, released in 1985, uses a slightly less organized but similar interface that lacks graphical command icons but maintains the same basic layout. Neuromancer, released the following year, tightens up the layout, shrinks the size of the action icons and text bar, and incorporates animated graphical scenes that span the entire screen, moving away from the mostly still artwork used in Tonetown.

While the Amiga version of Tass Times in Tonetown gives players a glimpse into this fun futuristic world, it’s far from the free roaming experience modern gamers expect. The locations players can visit are actually fairly limited, and wandering off the intended path will get players killed sooner rather than later. Discovering who’s holding Gramps (and why) and defeating him is a rewarding experience, but like most adventure games, Tass Times in Tonetown holds almost no replay value. The Amiga version contains an opening song that’s missing from most other versions of the game, but sadly does little more to show off its dominance over other hardware platforms. Interplay did a good job of porting the game to multiple systems, but I wish they had spent a bit more time leveraging the Amiga’s power to make it stand out from the pack. Obviously the graphics and sound are better on the Amiga than most other platforms, but fall short of what the machine was capable of.

Tass Times in Tonetown is worth a visit, although I suspect modern gamers may find the game’s engine a bit frustrating and be put off by the frequent use of insta-kills. The game is a great example of what adventure games once were, and what people in the past imagined the future might look like.