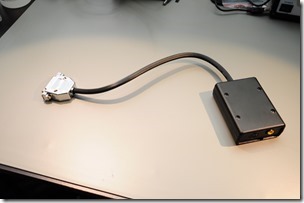 It was months ago on one of the Amigos Podcast episodes where I heard that John and Aaron were looking for a way to connect the A500 John has to his video capture device. They had purchased an A520 TV video modulator off eBay but it arrived DOA. I heard this and thought that it couldn’t be too complicated to build something that might help out. I was taught the basics of circuit design and assembly when I was in school and other than tinkering here and there I haven’t had much opportunity to put them to use. I started doing a little exploring and found a couple of posts on the English Amiga Board (post 1, post 2) where others had been doing the same thing and posted their circuit designs. I noticed at the heart of these circuits is the Analog Devices AD724 RGB to NTSC/PAL Encoder.

I examined the datasheet for the chip and it appeared to be a relatively easy circuit to assemble. I first re-drew the circuit so I would be more familiar with it.

I then put together my parts list and started ordering.

eBay was the cheapest place to order but it took forever for shipping as everything was coming from China. Though I did manage to pick up a few things at my local electronics shop. The first thing I did was breadboard a prototype circuit. You’ll notice right away the AD724 IC is up on “stilts”. Well….that’s what happens when I don’t pay attention to the datasheet for the AD724. I ordered the SOIC to DIP16 adapter PCB (the green board) but not the “wide” version, so I had to make do with what I had. I re-ordered a new adapter board, in case I need to make any others, which is being shipped now. The parts list above shows the correct adapter board. I plugged in the prototype into my A1200 and my Samsung plasma TV, crossed my fingers and turned everything on. It passed the first test, no magic smoke. 🙂 And after a short moment, I had a Workbench screen on my TV! Not satisfied with a boring black-and white Workbench 3.0 screen I immediately fired up a game I have on WHDLoad. Let there be the Misadventures of Flink! The colours were nice, not a lot of bleeding and for a prototype circuit I was very happy.

Next was to take the components from the breadboard and put them on a PCB. I wish I had a nice cheap way to make PCBs but I don’t, so I had to use a pre-made PCB that is usually used for prototyping. All the components fit on a 5cm (2″) x 7cm (2.75″) PCB fairly easily. I tried out the new circuit and everything was still working! Nice! I adjusted the trim capacitor (the green circular thing near the cable that is zip-tied to the PCB) a bit to clean up a bit of noise and it was great. I was surprised at how poor the composite output was compared to the S-video output. But in the time of HDMI and everything digital I guess I’m spoiled. Finally, I needed to put it in the case. I notched the PCB so that it would sit secure in the case and drilled out the holes needed to expose the S-Video and Composite video connectors. And the final product looks like, (drumroll please).

Here is some actual output I captured on my TV. Sorry for the size, but an animated GIF get’s big fast.

But those are all tasks for another day. I sent this adapter off to John and hopefully it will allow him to produce some Amigos Plays episodes on actual Amiga hardware. Finger’s crossed that it works for him!

On request form tankboy I’ve attached a high-res version of the circuit schematic.  This circuit is for connecting to an NTSC S-Video display.

Modifying to work with a PAL display shouldn’t be difficult: