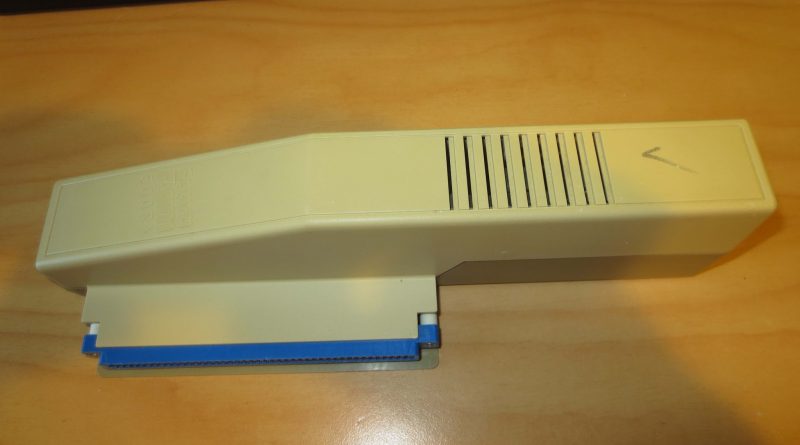 The Supra RAM 500RX is a RAM expansion for the Amiga 500 as the name would suggest. The 500RX plugs into the expansion port on the side of the A500 and increases the Fast RAM from zilch to 0.5, 1 or 2Mb configurations using 256K x 4 ZIP DRAM or 2,4 or 8Mb configurations using 1Mb x 4 ZIP DRAM. The RAM can be enabled or disabled by flipping the switch on the back of the 500RX case and rebooting. Some games and software do not work well with the extra RAM so it’s handy to have the option of disabling it.

A disk is provided which includes some documentation and a RAM test utility.

My particular module came with 1Mb RAM installed. I removed the 4 x 256Kb chips installed and installed 16 x 512Kb chips that I found in my stash and ran the RAM test but it failed nearly instantly. I noticed there were two types of RAM when I was installing them but because they were packaged together I assumed they were compatible. After looking online I found they were different speeds, one lot 70ns and the other 80ns. When I removed them I also found a loose pin on one and it fell out when I tried to straighten it so that would definitely have contributed to the issue. I tried RAM of the same type; just 4Mb and the test failed again. In another box I had lying around was 4Mb RAM so after installing just 2Mb of this the test passed so I installed the remaining 2Mb and the test passed again so I’ll run with 4Mb.

With a lot of RAM available you can configure workbench to load programs into RAM, therefore the computer does not need to look to the drives thus speeding up program loading.