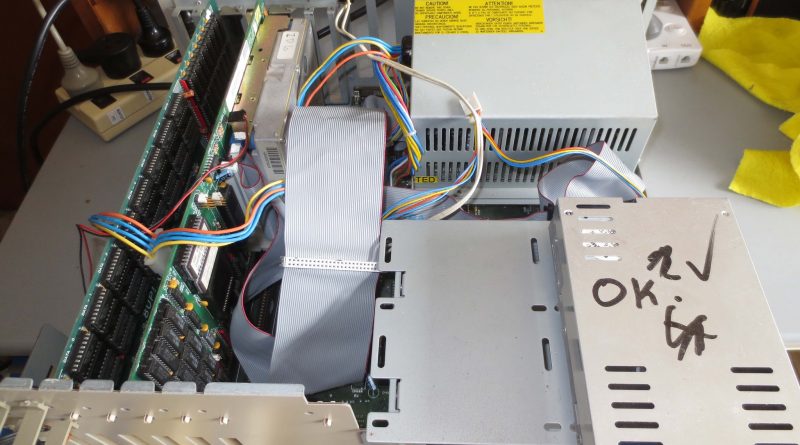 Here’s another A2000 off the ranks. This one booted from the hard drive and floppy drives okay but whenever the left mouse button was used it would stop responding to mouse clicks all together after a few clicks. I inspected the battery area and, you guessed it, the dreaded corrosion caused by battery leakage. Albeit minor, I felt the corrosion needed sorting. I lifted the CPU and a few of the socket pins came with it! So much for minor damage. I replaced the CPU socket and installed the CPU to find the mouse issue was still present. When the left mouse button was used to select an icon, that was okay. When another icon was selected it may be okay but if I

did that a few times the mouse pointer would move okay but I could no longer select with the left button, nor could I select

with the right button. Time to reboot – I did a lot of rebooting whilst testing these theories. I rebooted to hard drive, floppy drive with WB2.1 and WB1.3 and the problem remained. I also used the keyboard to control the mouse pointer with the same results. It seemed to me it had to be a hardware fault.

Upon rebooting I thought I’d use just the right button and it worked fine bringing up the menus in workbench. I right clicked and chose ‘execute command’ from the workbench menu and ran newshell and proceeded to run a heap of DOS commands with full success. I decided to try and run Directory Opus (DOpus)from the shell and it opened okay. The surprising thing was that I could use the left mouse button in DOpus until the cows came home. I backed out to workbench and within a few clicks, mouse clicks stopped responding. I also noted if I inserted a floppy disk into a drive, the icon for it would appear on the workbench. Deluxe Galaga ran fine for several games – Oh it’s such a hardship testing these computers. I always wondered why it took so long to get things done! This weirdness warranted a question on the English Amiga Board http://eab.abime.net – one of the best fonts of knowledge for the Amiga. Within an hour or so I had a reply from a very helpful person called Toni who suggested I try swapping the CIA chips. These chips are identical so swapping them should show a change if one of them is faulty. I swapped them and while doing so I noted the left CIA chip socket was looking dodgy. Anyway I carried on and when I booted the computer I got a whole heap of “““““““““ characters scrolling across the screen. It was time to try CIA chips from another unit but I had similar results. It was time to replace the left CIA chip socket, which I did and BINGO! All is running fine with the original chips installed.
I carried out more testing on the machine by playing some games installed on the hard drive and it ran fine for hours. Thanks to Toni on the EAB, I have sorted this issue and resurrected another dying A2000. By the way, this A2000 has a SCSI hard drive adapter and an 8UP! memory card installed. Both of which, at the start, I suspected may have been causing the issue but upon removing them, that proved not to be the case.
There is a switch installed which turns off power to the hard drive and the case has “Test bed” written on the lid so I think this was one of the computers the previous owner used for troubleshooting Amiga parts.
Anyway, time to do some “intensive” testing – Stunt Car Racer sounds like a good option…