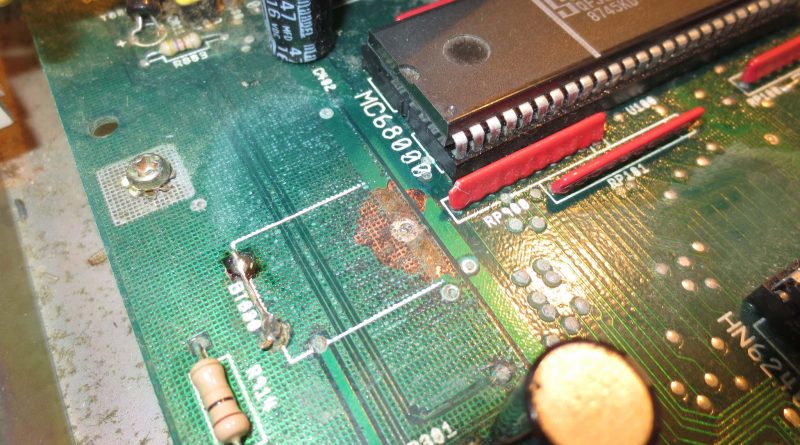 Well here is yet another A2000 that needs attention. This unit booted straight into Workbench 2.1 first time from the hard drive which makes some very strange noises like someone is banging on a sheet of metal. The drive seems to work fine and the noises disappeared after some time running. There was very minor battery leakage on the board so I sorted that first. The dual floppy drives were not working at all. I checked jumper J301 and it was set open for single drive use. Note the jumper settings of the floppy drives in the photos. I set J301 for dual drive use and drive DF1: worked but DF0: was making strange noises and not picking up disks properly. I pulled DF0: out and took off the outer shroud to reveal the guts. After blowing it out with compressed air I put a very small drop of sewing machine oil on the worm gear shaft near the motor bearing and lubed the worm shaft with lithium grease. It still didn’t work so I proceeded to install DPaint IV and Final Writer via floppy DF1: where all went well. I was just about to install another floppy drive when I tried DF0: for a final time and what do you know – it works fine. Go figure! Maybe the oil gradually worked its way into the bearing or maybe the heat from the computer helped? As part of the process of experimenting with these machines I have learned a lot and some of it may seem trivial but as I’ve said earlier, I’m basically a novice when it comes to Amigas. I had a 500 in the day and played games on it. I didn’t pay attention to the chip sets etc.

Well I was wondering why I couldn’t get super high res or productivity modes from most of these machines, even with the display enhancers fitted. I was looking on the Workbench 2 disks and doing some reading. At first I though it was because I didn’t have the correct monitor driver in the monitors directory but upon experimenting I figured this was not the case. I thought it was strange that there were no icons in the WB2 prefs directory and was starting to think I had disks that had been modified. I looked at some original WB2 disks and they were the same. After some head scratching I found the preferences directory on the WB2 Extras disk had the directories I was looking for but even after copying the correct monitor drivers into the appropriate folders, I was still not seeing the super hires modes.

I stumbled across the answer when I fired up my A500+ and the super hires and productivity modes were available. I fired up Sysinfo and noted the main difference between the A500+ model and the others including the A2000s. Some of you are probably screaming at me at the moment but yes it’s Denise. She is ECS (Enhanced Chip Set) Denise in the A500+ and OCS (Original Chip Set) Denise in the A2000s I have. I have several other models with ECS Denise installed but I don’t have the capability to output to monitors capable of displaying the super high resolutions. When I received my A2000s with flicker fixers I thought I was going to be able to run them on LCD screens at super high resolutions but that is obviously not the case. The resolution in hires interlaced mode is good enough for what I’m doing anyway.

If anyone was wondering what NAUG is that you see in some of the photos, it stands for Nelson Amiga Users Group. These labels were on the machines when I received them. Apparently the bloke who owned them was a member of the club and also provided a help desk for Amiga users in the area as a hobby. Nelson is a small city at the top of the South Island of New Zealand not far from where I live. One thought on “A2000 with floppy issues! Time for the doctor!”