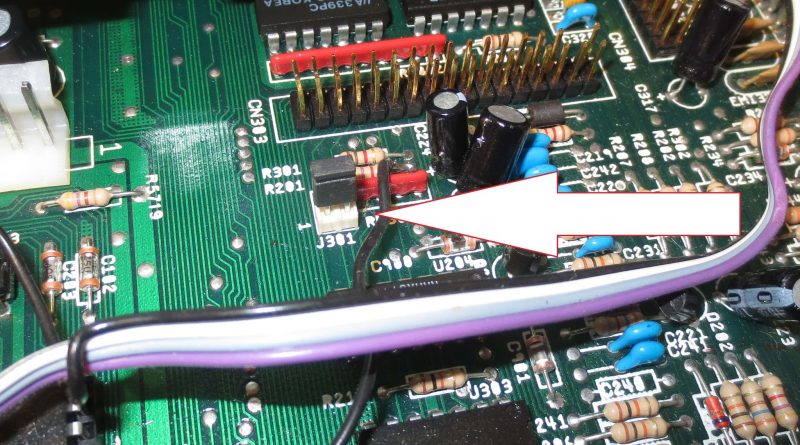 I decided to have a go at installing my Gotek floppy drive emulator alongside a floppy disk drive on the A2000 which has the ROM switch installed. I figured this machine was a good choice for compatibility reasons.

My first attempts at this failed because I didn’t realise there’s a jumper on the motherboard (J301) that needs installing to enable dual drives. After having a quick flick through the manual and removing the power supply/drive chassis I found the jumper and installed the jumper link. I connected the drives and fired up WB1.3 from the Gotek but the second drive was not being detected correctly. The icon was on the screen as DF1:????? and disks were not reading. At first I thought it may be to do with the order in which I plugged the drives into the data cable so I had a play around with that to no avail. I had read somewhere on the internet that there are jumpers on the floppy drives which assign the drive numbers, DF0 or DF1 and further reading confirmed that. I changed the jumper from the right position to the left position on the lower set of jumpers (looking from the back of the drive). Now both drives are playing well together although I did notice the drive light on the real floppy is on sometimes when maybe it shouldn’t be? I will investigate this further but for now all is good. I plugged in an external drive as well and now I effectively have three drives available. Loading of games seemed to work well but some just don’t detect when selected on the Gotek. I guess there could be some sort of compatibility issue here. Another great thing about the A2000 is that it will boot from either floppy drive, unlike some of the other models I have.

Anyway, time to have a play. Until next time, thanks for following along.