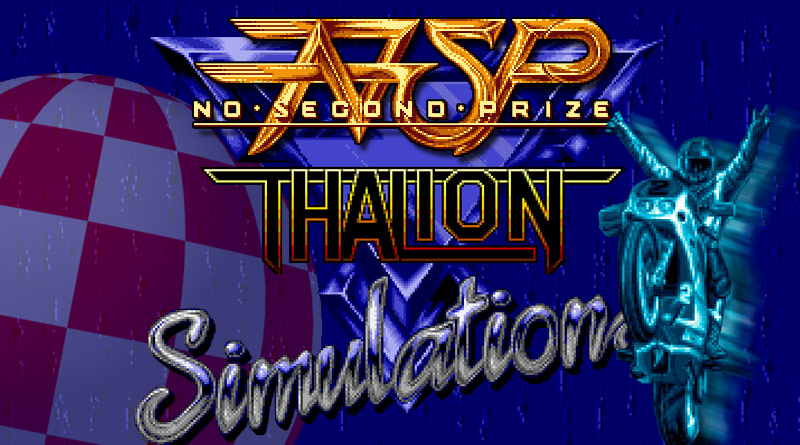 1992 seems to have been a good year for Amiga games.  As if to prove the point here is something a little different from Thalion Software, No Second Prize. The people behind Thalion were demo coders for the Atari ST. Their list of released games is something of a mixed bag. There are technical wonders such as Lionheart and games which, on first viewing, appear to be rather run of the mill offerings.

No Second Prize opens with a demonstration of the game engine’s abilities in first and then third person perspective. Right away you know that you are in for something a bit special. The game’s title is revealed to a beat from what has to be one of the best pieces of music in any Amiga game.

Before you set out racing you get the opportunity to practice on any of the tracks, use this to familiarise yourself with some of the trickier races if you like or just dive right in to the racing season. You will take part in 20 races where points are awarded for placing 3rd or better. No points for 4th or 5th place and if you end the race in 6th or worse and you have points taken away! Maybe a rethink on the name of the game is in order.

You’ll need to pick a rider. Stereotypical game characters are present, the blonde haired German, the upper class Brit sporting a spiffy moustache, an Italian playboy, the cool American musician with shades, a French fashion designer from Paris and the Japanese microchip factory owner. This could be the cast of a Fast and Furious movie.  They all have different strengths, some have a great top speed but corner poorly while others can take more damage before throwing in the towel. The Italian seems to be the best all-rounder.

If you are practising then take your pick of the real world tracks, more than half of which are located in the UK. My eye was drawn to Brands Hatch, a track I have been to many times as it’s only a few miles away. Brands Hatch is famously situated on a hill and has a notorious corner called Paddock Hill Bend. This is a long right turn at the end of the start finish straight which also drops downhill into a small valley. The world of No Second Prize does not represent changes in elevation at all. So all you get in the game is a short dip or bump in the road that lasts a few meters before popping back to level terrain. This is one area the 3D engine could have been improved to provide not only extra visual excitement but greater track variation.

You are asked to select a manual or auto gearbox, the keyboard is used for gear changes. Stick to auto until you really get the hang of the mouse controls. You can also select the sensitivity of the mouse which is used for steering. Too low and you will be making large movements to correct your direction, too high and your bike will be flailing around all over the track at the slightest touch. The default setting of 3 seems to be perfectly balanced.

The very first screen you will see on loading this game announces that this is designed to be a simulator. For the most part it succeeds but don’t expect the kind of depth found in F1GP for example. This same aims purely to simulate the thrills and spills of high speed motorbike action. You view the race through the rider’s eyes and you see your bike’s instrument readout at the bottom of the screen. This includes info such as speed, revs and the amount of damage you and your bike have taken.  The top of the screen keeps you updated on the race with your position and lap number along with two timers, one for the current lap and one for the overall race.  Roughly ¾ of the screen is handed over to the 3D engine, with an overlay of the track map which lets you keep an eye on your opponent’s positions as well as your own.

No Second Prize keeps the speed up by ensuring the complexity of the 3D graphics are at a level that is just enough to portray the world around you while asking you to use a bit of imagination to complete the picture. The polygon count may be low but the number of colours is quite high. Every surface is a pure colour, no dithering is used. By being frugal with the polygons Thalion have managed to create a racing game that is full of 2 wheeled thrills. One that runs perfectly on a standard A500 speed machine. 3D, polygon based racing games that are fast and fun to play are somewhat unusual on the Amiga. Not to say that this is the only one but the Amiga’s bread and butter racer was generally sprite based.

Gameplay is very simple, make your bike go as fast as possible while avoiding other racers and keeping to the track. There are no gimmicks here, keeping in line with the simulator premise of the game. The right mouse button accelerates and the left applies the brake. Move the mouse to steer and your rider leans over which causes the horizon to tilt as it would. Easy to understand but tricky to master. You’d better have a mouse in good working condition to play this game.

You are pitted against many other riders. Most of the bikes you will see on track are black or brown, these are there to make the numbers up and to keep you occupied should you get out in front of the main competition. Your proper rivals have uniquely coloured bikes and will always be the top ranking riders in the race, beat them to earn your points. The image above is the what happens when you leave the controller alone and allow all the other riders to complete the race, they pull off to the side of the track for a chat. As you can see the models used for the bikes are just detailed enough so you can tell what they are supposed to be.

Two types of on track obstacles have been left around to catch you out. The first is the oil patch, these cause you to skid slightly and lose some speed. The other is perhaps supposed to represent some debris and this causes a collision though not as heavy as hitting another bike or track side object.  Both of these hazards are shown as truncated square pyramids. Debris is quite colourful but the oil is black ( that’s right, this oil is so thick it clumps and sits like it was set in a jelly mold ).

Venture off the tarmac and you bounce around on the rougher grass areas that border every track. You also risk running into one of the many track side objects, these range from simple cones and trees to grandstands and emergency vehicles. The game’s difficulty increases by placing on and off track obstacles in locations designed to cause a problem. Yes, you can weave between cones placed on the outside of a sharp bend but there is no avoiding the bridge just after them…stay on the track!

Hitting obstacles or other riders will damage your bike and your rider. Take too much damage and its race over. The amount of damage depends on the speed of the impact. Knock into another bike and you are move likely to drop the bike on its side and skid for a while taking minimal damage in the process, it’s the time lost that hurts here. Hitting the aforementioned bridge at full pelt will result in a full stop and a lot of damage.

Your bike hums nicely as you zoom around the track but its passing other bikes when the audio in this game really helps encourage you along. There are no tunes during a race but this is a good thing.  See a bike in the distance you will hear it faintly, as you get closer it will get louder and louder until you overtake. Passing is accompanied by a simulation of the Doppler effect on the. A successful pass feels great, weaving through a group of bikes clumped together is highly satisfying.

No Second Prize features an instant replay function. This allows you to see the last lap or so from various  3rd person angles such as close to the bike, not so close to the bike and from behind the awesome chase helicopter. The helicopter automatically follows the lead bike. At the start of the race you will see it zoom off after the leader and you know you are getting close to first place when you see it flying above the track in the distance. During the replay you can select which bike to watch and change cameras too. Oddly, it seems you can only view the replay during a race so make sure you only trigger it when the road ahead is clear as it’s an immediate jump back into the action once you are done with it.

Quit out or damage yourself or the bike too much and you will have to sit and allow the race to complete in accelerated time but why not just skip to the results by tapping ESC. There are no restarts in No Second Prize, fail in one race and you’ll need to work harder in those following in order to finish the season in top place. During the season there are 8 save slots that you can use when you have to leave the game.

No Second Prize was released for the Amiga and the Atari ST and looking at the two running side by side there is very little difference to see. Where the Amiga outshone the Atari though was in the audio. The poor ST was stuck with (admittedly very nice) chip music and effects whereas the Amiga has sampled sound throughout.  Apparently, the Blitter functions of the Amiga aren’t used. I can’t help but wonder how much more could have been squeezed out of the Amiga if the game had taken full use of the the machine’s abilities.

No Second Prize is an excellent game, it is easy to see why it reviewed so well upon release. The majority of reviewers gave it a score of 84% and higher. I’d urge you to see for yourself what a great game this is and maybe have a go on another of Thalion’s 3D offerings, Trex Warrior.