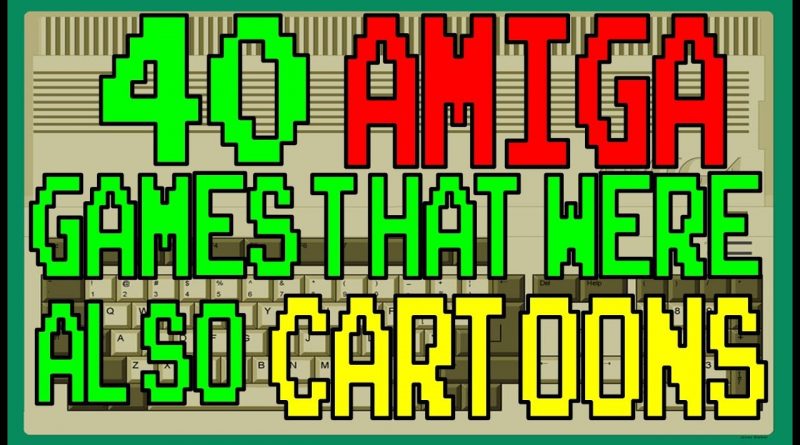 What was your favourite cartoon from the 80’s/90’s? Well there’s a good chance it will be featured in this video of 40 Amiga games that were also cartoons.

To celebrate the family of machines from Commodore that towered over the computing landscape in the 1980s and 1990s, we’re dusting off our floppy disks to remember the 30 games that defined this iconic line of computers.

1. The Secret of Monkey Island

Adventure games were around long before The Secret of Monkey Island, but only when Guybrush Threepwood dropped anchor on home computers did they rise to prominence.

LucasArts’ swashbuckling masterpiece brought point-and-click gaming to the fore, giving us a protagonist we could root for and a story to rival any tale from the annals of literature or celluloid, not to mention insult sword fighting. If you like strategic and puzzle games like The Secret of Monkey Island you will find to make a custom crossword really fun if you play with friends.

If there was a mascot for the Amiga, it would be the humble Lemming, the green-haired worker that was tireless in his efforts but was completely oblivious to the dangers around him.

Despite its cute looks, brilliantly simple chirpy music (partly inspired by melodies like ‘Ten Green Bottles’, which somehow still gets stuck in our heads today) Psygnosis’ classic puzzler was incredibly taxing and surprisingly dark, with Lemmings regularly meeting their demise in horrible ways, whether it’s falling from a great height and hitting the floor with a stomach-churning splat, or being suddenly crushed by a trap that springs from the ceiling.

A wildly different sequel to Bubble Bobble, Rainbow Islands was a masterpiece of beauty, design and sheer playability.

Bubby/Bobby are armed only with rainbows, which act as both weapon and bridge. They start at the bottom, get to the top and defeat the boss, defeating enemies and collecting diamonds along the way. Lather, rinse, repeat, as things get harder each level. It’s almost stupidly simple, but that simplicity belies the cleverness and ingenuity of Rainbow Islands.

Inarguably one of the greatest games ever made, players were interplanetary traders with an intriguing decision to make; play it safe for lower returns – such as dealing in agricultural goods on risk free journeys – or amp up the danger and cash right away by pirating slaves and contraband in sinister alien territories that often guaranteed an early death.

Knowing the difference between a Viper Mk II, an Anaconda or a Fer-de-Lance was vital to survival as different ships posed vastly different threats, and skilful piloting, business acumen and a ruthless trigger finger were all needed if you wanted to rise through the ranks to ‘Elite’. Whatever happened, it sure felt like the closest we’d ever come to being Han Solo.

Sensible Software’s sequel to their own Wizball, it’s really two games smooshed together as one. For the action part, you play Wizkid’s disembodied head, and with the help of a red nose power up and/or a pair of teeth, bounce and grab blocks to thwack your enemies.

Collect the bonus music notes and you sprout legs and go into puzzler mode, where you have to really think pretty broadly to get to the end. It’s part-arcade-platform, part-puzzle-adventure, part-kitten-chase, part-knob-gags with the odd mini-game thrown in, and it’s all utterly wonderful.

Sensible Soccer proved that you don’t need cutting-edge 3D graphics or realistic sound effects to create a classic football game. It was about as simplistic as they come, and that was its greatest strength.

Learning the basics took a matter of minutes but mastering the game could take a lifetime. This was the gaming equivalent of jumpers for goalposts, but Sensible Software made the beautiful game live up to its name like never before.

Cannon Fodder saw Sensible Software take the tiny, pixelated sprites from its successful footie sim Sensible Soccer, whack them in helmets and tanks, let us divide them into pincer movements and send them into enemy territory to be slaughtered mercilessly.

The easy-to-learn controls, dividing your platoon into pincer movements with a click of a mouse, and the haunting sight of your named soldiers not just joining the death toll but having their tombstones actually appearing in front of you (even X-COM isn’t that dark) were simple but genius.

Another World innovated with its design – stripped of any on-screen options, carrying an extremely striking visual style, featuring minimal dialogue – to tell a story with genuine heart about the bond between Lester and the alien Buddy. A truly impressive achievement when you consider the era this game was developed in.

Eric Chahi’s cinematic platformer was an unforgiving title at times, but making the end was satisfying and worth the effort, mirroring the trouble Lester has to go through to survive and escape the unrelenting alien hostiles.

The Amiga was a system awash with cartoony, brightly coloured and slightly surreal platformers, and though you could trace its lines back from home consoles, nothing represented that era better than James Pond 2: Robocod.

When our anthropomorphic fish protagonist wasn’t rescuing penguins in Santa’s toy-filled workshop (sponsored by none other than Penguin biscuits), he was riding in flying bathtubs, fighting against deadly, screen-filling teddy bears, pinging off birds with playing cards for wings, and collecting sweets on giant submarines. As we said, surreal.

In visual terms – with its square, single-screen levels, blocky layouts and ghost-like enemies – Bubble Bobble is very clearly a successor to Pac-Man. The similarities pretty much end there, with players progressing from level to level by trapping enemies in bubbles and popping them to death.

One of the best things about Bubble Bobble is that, while it offered a classic arcade challenge, it wasn’t so nose-bleedingly difficult that completing all 100 levels was an impossibility. Almost 30 years later, we can still hear the music in our heads.