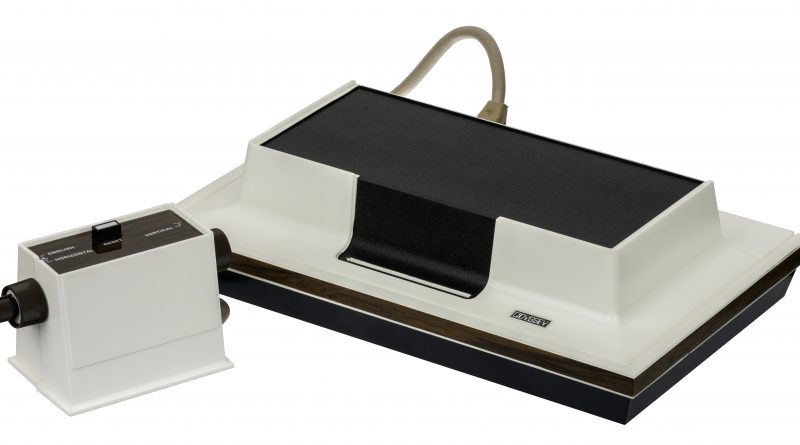 Welcome to Part one of a new series covering the yester year console and computer models (not handhelds, that’s for another day!).  Relive those nostalgic memories as I attempt to cover the most memorable machines of the generation rather than every release. The Magnavox Odyssey was released in September 1972 (EU 1973) as the first commercial home video game console.  It has an introductory price of $99 and sold some 350,000 units in its lifetime.

It was developed by Ralph H Baer who is known as the ‘Father of Video Games’ and been an active engineer for the past seventy years, having accumulated over 150 U.S. and foreign patents, many of which are in the Consumer Electronics area and have resulted in a variety of products, including many successful electronic toys and games such as used in the SIMON game. Although the idea for the console was thought up by Baer in 1966, he worked alongside Bill Harrison and Bill Rusch to create seven successful prototype consoles.  The 7th, known as the Brown Box was shown to several manufacturers before Magnavox agreed to produce it in 1971.

The Odyssey was controlled using two paddles (three knobs and one button) and was capable of displaying three square dots on the screen in monochrome, although no sound capabilities.  Gameplay was enhanced by players placing plastic overlays on the screen to create visuals for the games.  The Odyssey also came packaged with dice, paper money and other board game items to further enhance some of the games.  The first video game light gun was sold separately.

Baer’s patent of the video game art formed the basis of a series of lawsuits over 20 years, earning Sanders and Magnavox over $100 million. Games
There were 26 games released for the Magnavox (associated Game card) numbers):

This modern console at the time was however not to remain as it was extremely clunky and un-challenging.  It also suffered from marketing materials that implied it could be used only on Magnavox-brand television sets although this wasn’t true, but Magnavox hoped to drive related TV sales.   As a result, the Odyssey sold only 350,000 units over its three-year life. Although Dutch TV manufacturer Philips purchased Magnavox in 1974, after which it began to release its own versions of the dedicated Odyssey consoles in Europe;  Odyssey 200, 2001, 2100.
The Odyssey 2 was released in 1978 (2nd Generation). Pong is one of the earliest arcade video game that featured simple two-dimensional graphics that reached mainstream popularity.  Originally manufactured by Atari in 1972 and created by Allan Alcorn as a training exercise assigned to him by Nolan Bushnell.  It was based on the ping pong included in the Magnavox Odyssey, which resulted in a lawsuit against Atari in April 1974. Lawsuit
Magnavox filed suit against Atari, Allied Leisure, Bally Midway and Chicago Dynamics. Magnavox argued that Atari had infringed on Baer’s patents and his concept of electronic ping-pong based on detailed records Sanders kept of the Odyssey’s design process dating back to 1966. Other documents included depositions from witnesses and a signed guest book that demonstrated Bushnell had played the Odyssey’s table tennis game prior to releasing Pong.

After considering his options, Bushnell decided to settle with Magnavox out of court. Bushnell’s lawyer felt they could win; however, he estimated legal costs of US$1.5 million, which would have exceeded Atari’s funds. Magnavox offered Atari an agreement to become a licensee for US$700,000. Other companies producing “Pong clones”(Atari’s competitors) would have to pay royalties. In addition, Magnavox would obtain the rights to Atari products developed over the next year. Christmas 1975 was when Atari released the home version of Pong ($100) exclusively through Sears retail stores, with over 150,000 units sold during that period.  The first units manufactured were branded with Sears’ “Tele-Games” name. Atari later released a version under its own brand in 1976. Really this is a Pong clone but it holds some memories for me so I’d thought I would include it.
It was the first of the “TV Master” series and offered different type of 4 pong games (squash, squash practise, football, and tennis). Its range included many different models such as; TV Master MK IV, 4 plus 2, MK 6, MK 8 and MK 10 which display all games in black and white whilst the Colour TV Game range ; 4 plus 2, Colour TV Game MK 6 and MK 10 are the same with the exception of displaying colour games.
The underside and switches of the former are grey while those of the TV Master are orange. The Colour TV Game has also a small ‘colour’ logo next to its name.

The paddles are rather small, with one knob each, but are detachable and connected to the system through two small sockets.  One interesting feature is that there is a switch to toggle the sound.