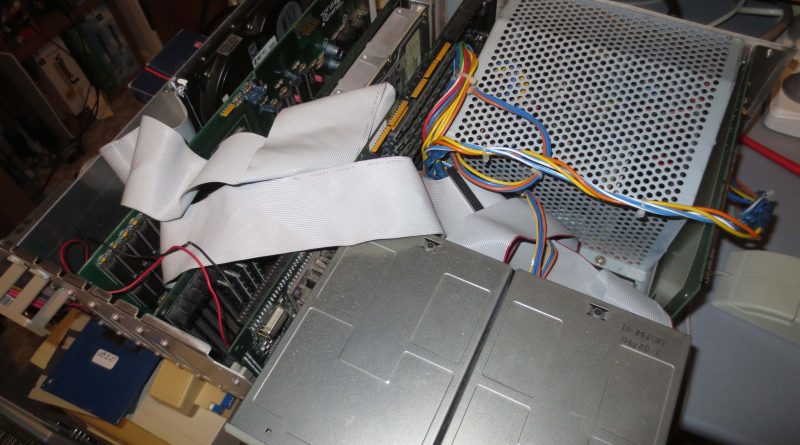 I’m playing catch up to get the blog up to date as I spent the Labour Day long weekend messing around with the new additions to the family.

I decided to have a go at restoring one of the A2000s that wasn’t booting and I chose this one because it has a Great Valley Products A2000-040 card installed, a Picasso II graphics card, an A2320 display enhancer, a hard drive card with two drives and an IDE controller with CD-ROM drive attached. The initial problem was no screen output and I couldn’t be sure if the machine was actually booting. The battery on the motherboard was, surprisingly, in good condition although I did notice some very faint discolouration on the board where it had started to leak. I removed it and measured it at 4.2V. I cleaned up the board and partially assembled the machine, leaving out the Picasso II, A2320, hard drive card and IDE card, connected to my monitor via RGB and it booted to the loading screen. Inserted Workbench 2.05 boot disk and away it went, albeit after some delay before seeing anything on the screen.

Installed A2320 Display Enhancer and plugged in my LCD flat screen and no output again! Flicked the enable/disable switch on the back of the card and away it went. Making progress…

Installed SCSI hard drive card and connected both drives and now I get a message informing me it can’t find DH2 and by the sound of it the second drive was not spinning up so I connected an independent power supply to the second drive to no avail. I booted into WB via floppy and edited the startup-sequence file, commenting out any references to DH2 and DH3, disconnected second drive and BINGO! She booted into WB3.1. I ran Advanced Amiga Analyzer which I got with this collection and it confirmed some of the hardware information. Installed the Picasso II card and connected the pass-through cable from the A2320 and booted. I momentarily saw a high resolution screen appear before it promptly disappeared again but the computer showed activity as though it was still booting. I assumed it was an issue with the display going outside of my screen’s capability. I noted previously something in the start up folder I had not seen before so I removed the card and booted so I could remove the icon from the folder. I’m yet to look into what the program does but it’s definitely something to do with the Picasso because I could boot fully now after inserting the card again. I played around with resolutions until I found one that works well with my screen.

The A2000-040 card has a fan mounted on the CPU which is very noisy. I can’t see any way of getting lube into it and I’m reluctant to replace it because the heat-sink is held on with some sort of strong heat-sink glue.

I ran Super Frog from the CD and had a quick play. I was very pleased to get this machine going because I thought it was a dead duck at first. My next post will be about the second car load of gear I picked up today.