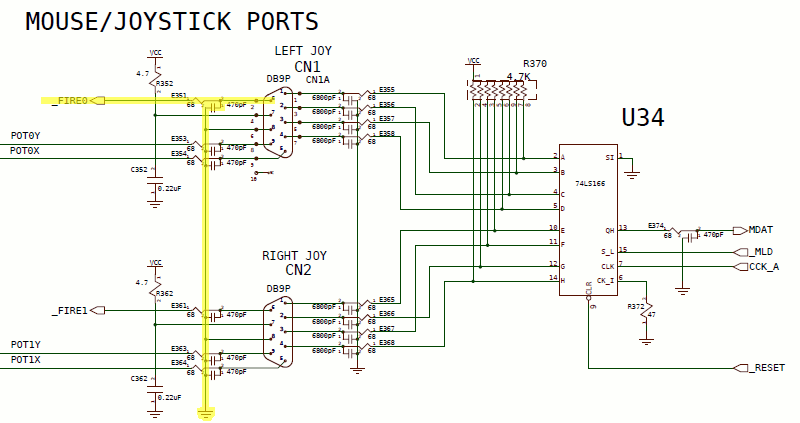 AMIGOS labs
September 13, 2016February 9, 2017 boatofcar 1 Comment Amiga Repair
Jason Warnes writes:
Hey guys.  I was listening to the Battle Squadron podcast and I heard Aaron is having problems with his A1200 with a phantom mouse clicking problems where.  Now I am not a service engineer or anything like that but I took a quick look at the A1200 schematic (available here) and the circuitry for the button clicking on a mouse appears pretty simple. There are a few of things that might be causing this problem that I’d suggest checking.
1st
The left-click button is on pin 6.  It apparently goes a 68? resistor connected to the 8529 CIA-A (U7) on pin 10 (labeled _FIRE0 on the schematic above).  It would be interesting know, with the power disconnected, if you took your multimeter and measured to see if that resistor is still measuring at 68? or if it’s gone bad.  You can find the resistor on the back of the motherboard (sorry man!) and it’s near the mouse/joystick ports and it’s labeled E351R.  I tried to highlight it yellow in the image below the area it can be found. With the power disconnected, try performing a continuity test (or failing that, just a normal resistance test) from the resistor E351R to pin 10 of the 8520 CIA-A labeled as U7.  The 8520 CIA-A chip should be found on the top of the motherboard.  I highlighted the 8520 CIA-A and which pin should be pin 10 in yellow in the pictures below. Depending on the side of the resistor you’re on, you’ll either get 68? or 0? resistance measurement.
3rd
There is also a 470pF capacitor tied to ground for the left-click button.  It could be that the capacitor has gone bad and may need to be replaced.  Actually the right-click (pin 9) and the middle-click (yeah middle-click) (pin 5) buttons use the same circuitry.  If you don’t have a 470pF surface mount ceramic capacitor kicking around (because who really does?) you might be able to use the 470pF capacitor from the middle-click button.  If you take the capacitor from E354C and put it in place of the capacitor at E351C and fire up the machine.  It might be a good test.  If it works then all you need to get is a 470pF surface mount ceramic capacitor.
4th
It could be a bad 8520 CIA-A chip.  Though I think it’s unlikely because it’s not demonstrating any other problems.  The same CIA-A chip also controls the joystick port, so if it’s behaving then further supports it’s unlikely the CIA-A.  Besides, testing for this would be tough.
5th
I ran across a strange mouse related problem on the Amiga.org forum (http://www.amiga.org/forums/showthread.php?t=66445) where arttu80 had a problem where he couldn’t click at all.  For him it turned out to be a bad keyboard controller which was stealing his mouse clicking control.  He ended up swapping out the keyboard controller chip and that seemed to fix his problem.  But you’re not having your left-click sticking, your having it randomly getting clicked.
I personally think it may be a bad E351C capacitor.  It’s probably the simplest component to fail and should be relatively easy to test and repair.  From what you’re describing, if the capacitor is bad it might be causing a transient voltage to appear which may cause the phantom clicking.  Besides, starting to get into replacing the CIA-A or keyboard controller IC’s might be a bit more of a bear if you don’t have the tools.
Love the show guys!  Keep the Amiga love flow’n.  Your guys podcast definitely re-ignited my love for the system.  An Amiga A500 was the first computer I ever purchased with my own money when I was a kid.  But alas I sold it years ago.  🙁  But I just got my hands on an A1200.  I’m just waiting for some power supply parts and I should be up and running soon.  Man is it hard to find stuff here in North America!  But I’m stubborn so I’ll get everything I need eventually.  I’m definitely looking forward to using it!
All the best from Canada!