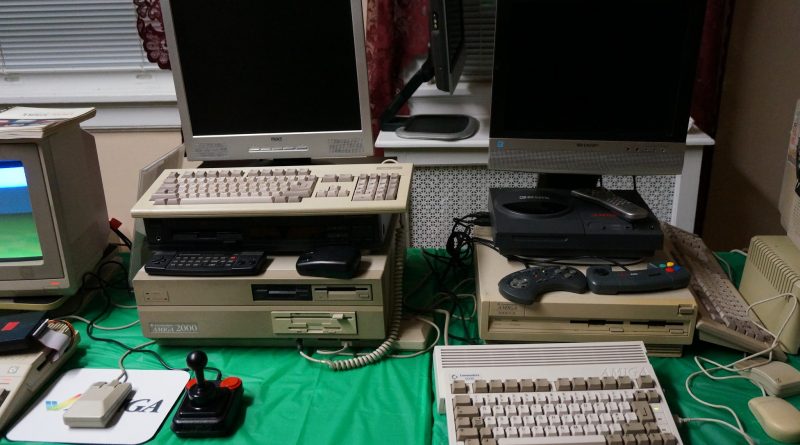 Amigos listener Guru Anthony was gracious enough to provide pics of his A3000UX, as well as various other assorted goodies. See below, with his comments! Here is a second pic of the 3000UX. Under its own keyboard and the “pregnant” mouse next to it is also from the 3000 though an actual UX would come with a three button version of that mouse.
Interestingly, the 3000 uses the same keyboard connector as the 2000 which is just like an XT keyboard connector. But the 3000 Keyboard adds the extra detail flourish around the function keys with that raised part on the keyboards casework. The 4000 they changed the connector to a small PS/2 plug, but kept that molded detail around the function keys. So the 3000 keyboard looks like a 4000 one,  but they have different ports for the connector.
Still looking to see if I have a pic of my 3000 from when it was in my basement.
It has remained upstairs while I contemplate installing A/UX on it. Here is the 3000UX in my basement under the Toaster Cozzy, a box that contained a power supply and board that connected with a ribbon cable (and a very wide one at that) into the 3000. At the end of the ribbon cable is a board that plugs into the video slot. This brings the video slot out into the Cozzy so you can plug the toaster board in the external case. Freeing up the space since the Toaster covers the slot next to the one it is plugged into. So in a 3000, the Cozzy frees up to two Zorro slots (one would have to be a shorter half length card not to interfere with the board plugged into the video slot.